Toyota Trying to Appeal to Millennials with FT-4X Concept 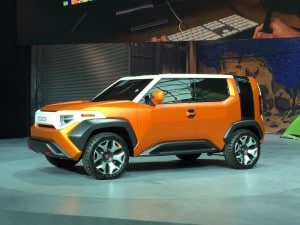 Toyota's looking to appeal to millennials with the new FT-4X Concept at this year's New York International Auto Show.

If Toyota’s latest concept vehicle debuted in New York is any indication, the Japanese automaker believes that millennials are buying new vehicles as the FT-4X Concept is aimed squarely at that segment.

The almost Lego-ish SUV concept evokes a sense of what the recently discontinued FJ Cruiser might look like in another decade or so. However, this is designed to allow millennials to live their lives on their terms: no boundaries and quick decisions.

It’s a four-wheel drive toolbox penned by Toyota’s Calty Design Research Inc. in Newport Beach, California. With its long list of unique functionalities and a Rugged Charm compact design, the FT-4X is the seamless conduit of popular Casualcore – rather than hardcore – outings by anyone, anytime.

“As designers, we’re investing deep thought into the emotional connection with our cars,” said Calty President, Kevin Hunter. “The Toyota FT-4X is not simply a concept where style meets function; it is a thoughtful, charming and engaging experience that adds real pleasure and convenience to the journey.

“We focused on how a crossover vehicle can add fun and value to casual adventures both in and out of the city, thinking about how someone would use it, and what they would love to do with it.”

The idea behind the concept to cater to the group’s propensity to shift from one type of activity to another. Those movements are often extreme and quick, officials noted. That could mean going from a trek up a mountain pass in the late morning and then heading down for a late afternoon casual gathering with no stops in between. 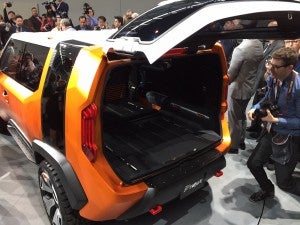 The rear of the the FT-4X was actually designed first to ensure the functionality needed for millennials remained intact.

Casualcore adventures tend to start in the city, as most millennials enjoy the outdoors but are more likely to spend most of their time indoors. Knowing this, Calty’s designers instituted a Rugged Charm ethos when creating the FT-4X.

That charm places value on simplicity, capability, durability and Toyota lineage, the automaker notes. Furthermore, it takes into account compact, sturdy dimensions, and a charming ubiquitous tactility of grips, handles, and controls (the notion of feeling a satisfying mechanical reaction to a user’s input).

“You can really tell that we had a blast designing the FT-4X because it looks fun to use and fun to drive,” described Calty Studio Chief Designer, Ian Cartabiano.

“I love this idea of mechanical satisfaction because while we’re living in today’s digital world, we took something that’s based on physical movements and made that a large part of what this vehicle is. We want everyone to interact with this car and feel a sense of delight and excitement.”

The result is the Multi-Hatch. The hatch opens two ways: Horizontally in Urban Mode, and vertically in Outdoor Mode. Urban Mode splits the hatch in half and makes for easier curbside gear loading when clearance is limited.

Outdoor Mode opens the one-piece hatch upward, creating an impromptu shelter from the elements. The door’s design also incorporates a satisfying mechanical touch: a rotatable handle that users turn to select its opening mode. The deeply set handle is capable of being gripped by a gloved hand, say, when loading or unloading while snowboarding, or when out-and-about on a wintry day.

Well, it has charm o’plenty, but it’s also got the rugged. The exterior design affords young off-roaders plenty of room to maneuver with generous approach and departure angles on the ute’s corners and large windows to improve visibility.

Contributing to the look and functionality of the FT-4X is its “multi-tool cabin.” Not a statement about who’s driving this ute, but instead a reference to twin boxes designed to handle warm or cold items, such as beverages, food, etc.

The cabins is divided into three sections or zones: Clean Zone, Wet Zone and Rear Cargo Zone. Clean Zone, where the front passengers sit, and where rugged floor mats and door sills were inspired by Japanese sunoko slatted wood flooring; Wet Zone, also characterized by all-weather mats (where passengers can stow damp swimsuits/snow clothing or muddy boots) and located just behind the front seats, as well as below the rear second row bench seat; and, Rear Cargo Zone.

The Rear Cargo Zone’s floor lays completely flat and features topside tracks for securing cargo. A deep storage compartment is hidden underneath, and can be accessed by sliding the floor out toward the Multi-Hatch, transforming the floor into a tray. Folding the second-row bench seat down extends the floor’s capacity considerably.

Perhaps most important of all: What powers this beast? Well, Toyota didn’t really give a concrete answer. However, the maker did say “one could assume the FT-4X could potentially employ a small displacement four-cylinder engine.