Subaru on the Ascent as it Previews New 3-Row Flagship 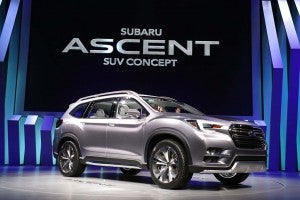 The seven-passenger Subaru Ascent Concept will become the maker's biggest model ever.

Subaru has been saddled with a yawning gap in its line-up since the American-made Tribeca SUV went out of production in 2014, but it’s getting ready to fill the three-row opening with an all-new model that, it confirms, will be dubbed Ascent.

The name is appropriate, considering the steady stream of record annual sales the Japanese maker has turned in, topping 1 million vehicles worldwide last year for the first time. Subaru was one of the first to capitalize on the crossover trend, and the Ascent could add even more momentum – if it can avoid the pitfalls that waylaid the Tribeca.

The maker is bringing an assortment of new production crossovers to this week’s New York International Auto Show, including the smaller Crosstrek, but the brightest spotlight is on the debut of a concept version of the Subaru Ascent, a show car that is expected to undergo relatively modest change before it starts rolling off the line in the very near future.

(Lincoln completely remakes Navigator for the first time in a decade. Click Here to check it out.)

While offering a look at the three-row CUV, Subaru was coy with details about the production model to follow, though TheDetroitBureau.com was able to confirm the final version of the Ascent will be revealed about the Los Angeles Auto Show in November. 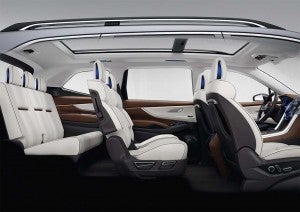 The Ascent is Subaru's first three-row model since the Tribeca went away in 2014.

One of the most important bits of news came in an advanced news release that noted, “Both the design concept and the production Ascent will feature an all-new turbocharged direct injection boxer engine.” Word has it that we’ll be seeing Subaru switch to an all-four strategy, but the new four-cylinder turbo is expected to develop more horsepower and torque than the maker’s current boxer-six.

The Ascent Concept is meant to focus our eyes on the new Subaru brand design language, and the look of the new Ascent is more modern, sleek and balanced than the old Tribeca which frequently got ridiculed for having one of the most ungainly faces in the business.

Luckily, the design concept is more attractive than the name Subaru is giving the new look, its “Dynamic x Solid” styling language. The bold fender flares give the new SUV a more solid, planted appearance, as does what Subaru calls a “large, bluff grille denoting a true SUV look.”

Inside, the Subaru Ascent Concept reflects the maker’s new-found intent to deliver a more refined and well-appointed cabin. It features a flowing dashboard design and a seven-seat layout with middle-row occupants getting captain’s chairs.

The new seven-seat concept borrows from the earlier VIZIV-7 concept that was roughly the size of the Chevrolet Tahoe. The new concept retains its hefty proportions, measuring 198.8 inches, nose-to-tail, with a 117-inch wheelbase. It stands 78.3 inches in height with a width of 72.4 inches. 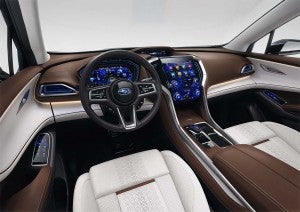 The production version shares the same architecture as the much smaller Subaru Impreza. Dubbed the Subaru Global Platform, it is likely to be used for virtually everything in the maker’s line-up going forward, a strategy most automakers are today using – Volkswagen, for example, finds a way to stretch the MQB platform found under the Golf to also support the new, three-row Atlas SUV.

Adding a three-row model to the line-up should boost Subaru’s brand loyalty, analysts suggest. The maker’s problem is that it currently has nowhere for family buyers to go but elsewhere if they need anything more than a five-seater. And there’s plenty of competition out there in this segment.

“We missed this segment for Baby Boomers,” said CEO Doll. “We need something larger to let (new Millennial) customers move up.”

Look for the production version of the Subaru Ascent to show up in dealerships in 2018, the company says, as a 2019 model. As with the old Tribeca, it will roll out of the Indiana assembly plant. The starting price is expected to come in under $40,000, though it could nudge $50,000 in well-appointed trim, observers anticipate.

(Subaru parent finally names itself…Subaru. Click Here to find out why…and why it took so long.)