Lincoln Wants Back In With Remake of Big Navigator

A long-awaited remake puts Lincoln's big SUV back in the game. 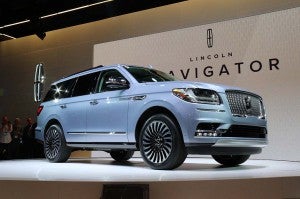 With the 2018 Lincoln Navigator, the big ute gets its first full makeover in a decade.

The company that invented the full-size luxury SUV has been little more than an also-ran in recent years, Ford Motor Co. long neglecting its big Lincoln Navigator – until now, anyway.

This week’s New York International Auto Show will see the debut of a flood of new sport- and crossover-utility vehicles, but perhaps none has been awaited with more interest than the 2018 Navigator which is finally getting the complete makeover it has long and desperately needed.

Lincoln gave us a hint of what was in store at the 2016 NY show, though the production model abandons some of the wilder design touches from that concept, including the gullwing doors and descending stairsteps. Nonetheless, the new Navigator adopts a more modern, luxurious and aerodynamic appearance, while loading up on the sort of high-tech safety, comfort and convenience features high-line buyers expect – but which were largely missing from a halfway refresh of the big ute two years ago.

“When designing the Navigator, we put an emphasis on ultra-luxury touch points,” said David Woodhouse, Lincoln’s design director. “We took everything the client would see and touch, and made sure it would look and feel a little more exuberant, a little more indulgent and incredibly beautiful.” 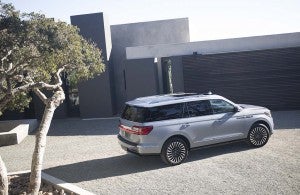 The new Navigator is powered by a turbo-six making 400 horsepower.

Carried over from the 2016 show truck, the fourth-generation Lincoln Navigator picks up on the distinctive grille that is now standard on recent additions to the line-up, such as the Continental sedan.

One of the more intriguing design details, according to Lincoln, is the way the new Navigator uses exterior mood lighting. As the driver approaches, the maker explains, “the chrome Lincoln star logo on the grille softly illuminates. Then, LED lighting in the lower front body and taillamps subtly engages, and a luminous Lincoln welcome mat appears beneath the front doors.”

The grille is frame by a new speed-dependent adaptive lighting system that not only can turn into corners but which adjusts the spread of its beam, widening the field covered at lower speeds to help drivers when passing through a residential area.

The Navigator will arrive in Lincoln showrooms about the same time an all-new Expedition arrives in Ford dealerships. The full-size luxury and mainstream SUVs share the same new platform derived from the aluminum-intensive F-150 pickup Ford introduced two years ago. The 2018 Navigator sheds about 200 pounds compared to the old model, which should mean both better mileage and improved ride and handling.

Inside, the big SUV takes on a more refined appearance. Lincoln is expected to also offer some of its limited-edition Black Label packages for those wanting a more unique look. Meanwhile, the maker has taken steps to quiet the cabin, such as switching to laminated front and side glass.

“Quiet luxury is both a look and a feeling,” said Kumar Galhotra, president of The Lincoln Motor Company. 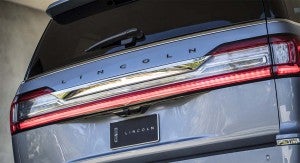 The Navigator shares the same, aluminum-intensive architecture as the '18 Ford Expedition.

One of the more significant updates for the 2018 Lincoln Navigator has been the move away from traditional V-8 power to a new EcoBoost twin-turbo V-6 that, nonetheless, punches out 450 horsepower through a new 10-speed automatic first used on the 2017 F-150.

Solid performance is a must in this segment, but the real sales pitch is about the experience of being inside the spacious, three-row ute. Each seat features its own storage, with an adjustable shelf mounted behind the rear seats. There also are six USB ports, four 12-volt outlets and another providing 110-volt power. A wireless phone charger can also be ordered for the front center console. The Personal Profile system, meanwhile, recalls not only driver mirror and seat positions, but also climate and entertainment settings.

Like the Continental, both of Navigator’s front seats have 30-way power settings. But even the rear seats feature power recline.

Up front, Ford has revised its button shifter, first unveiled on the MKZ sedan. Renamed the Piano Key Shifter, it gets larger buttons mounted horizontally under the touchscreen.

The infotainment system is Ford’s latest Sync3 and adds both Apple CarPlay and Android Auto. There’s an optional 20-speaker Revel II audio package, and an available rear-seat entertainment system with twin 10-inch screens that each can show different programming. An onboard 4G LTE WiFi system also allows passengers to use their own digital devices.

The Navigator will be offered with what Ford claims is not only the biggest, but brightest, Head-Up Display system on the market. And it has been designed to be visible even to a driver wearing polarized sunglasses, a problem with most HUD systems.

(Welcome to a new era of muscle SUVs. Click Here for the story.)

Other tech features include Trailer Backup Assist, which will steer a trailer where the driver wants it go go; a 360-degree backup camera, parallel and perpendicular park assist, adaptive cruise control and a head-up display.

Not all of what Lincoln is offering is built into the Navigator itself. The luxury brand has been developing a suite of services to expand its overall appeal, including free pickup and drop-off — as well as a loaner vehicle — for service and repairs. And it is just launching a pilot program in Miami that would let owners call for a chauffeur when needed.

All those features and services are meant to put the 2018 Lincoln Navigator more on par with such tough competitors as the Cadillac Escalade, the dominant player in the full-size luxury SUV segment – a segment the Lincoln Navigator created and once led. Regaining its standing will be tough. The Lincoln ute was neglected far too long, but the 2018 update at least turns the big ship in the right direction.