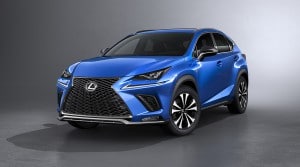 Lexus updates its NX crossover for the first time since its 2014 debut.

Continuing its campaign to pump more “passion” into the line-up, Lexus has rolled out a newly updated version of the NX crossover at the Shanghai Motor Show.

Already one of the most angular and aggressive models in the brand’s growing SUV and CUV line-up, the 2018 Lexus NX reveals a number of modest but notable visual revisions, front and back. It also adds some welcome new technology and, the luxury arm of Toyota claims it has also taken steps to improve the handling of the compact crossover.

We’ll let Shin Kamiura, a member of the Lexus Design Division, describe some of the salient exterior updates: “Starting at the spindle grille, the way the front edges connect to the front fenders results in a much bolder expression than before, clearly highlighting the NX’s style design architecture.”

The leader of the NX exterior redesign, Kamiura adds that, “We’ve also changed the shape of the lower front bumper to better support the spindle grille, as well as relocated the fog lamps to the corner of the front bumpers, separating them from the ducts. The result is a front fascia with a stronger and more aggressive presence.” 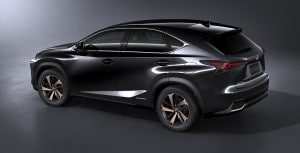 The tailgate of the 2018 Lexus NX will now be operable by a foot waggle under the bumper.

In the rear, the 2018 Lexus NX gets revised taillights, as well as a revised diffuser with integrated tailpipes. The NX Hybrid, meanwhile, there’s what Lexus describes as a “a slotted sectional piece with an L-shaped satin chrome border” that flows into the underbody spoiler to further enhance aerodynamics and improve fuel efficiency.

(Lexus mixes pleasure with performance on new LS F Sport. Click Here to check it out.)

As for the cabin, changes are modest but meant to simplify operation and give the NX a more upscale look and feel. The infotainment touchscreen, for example, grows from seven to 10.3 inches. The touchpad has been simplified, and there are fewer buttons to have to deal with. Most of the remaining knobs and switches, as well as the door and shift handles. now get a metallic finish.

“Even if it can’t be immediately seen, an acute attention to detail, such as the way the stitching of materials creates a subtle pattern, can be felt spiritually to make a difference to the customer. That is the essence of the takumi way that elevates the entire construction of a Lexus,” boasted Takeaki Kato, the Chief Engineer of the NX.

New technologies include more powerful USB chargers to boost recharging times, an improved wireless charging system, and a tailgate that can be operated by a waggle of the foot under the rear bumper – a surprisingly late addition considering the wide range of mainstream models where that feature is now available. 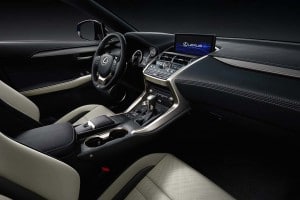 For 2018, the Lexus NX opts for a bigger screen, fewer buttons and new metal finishes.

(Click Here to see what Lexus has planned for the UX concept CUV.)From a technical standpoint, the biggest update for 2018 is the Adaptive Variable Suspension which is now based on the same system introduced on the new Lexus LC 500 sports coupe. It increases by more than twenty-fold the speed at which the suspension can adapt to both road conditions and driver input. To further enhance ride and handling, Lexus says it has retuned the crossover’s springs, stabilizer bars and bushings.

NX fans will notice that that the old NX 200t is gone from the line-up – well, the badge, anyway, with it being renamed the NX 300. It will retain the 2.0-liter turbo-four engine, while the 2018 Lexus NX 300h will carry over the 2.5-liter inline-four paired with twin electric motors.

The revisions mark the first time the Lexus NX has been updated since the crossover was introduced in 2014.

(Click Here for complete coverage of the 2017 NY Auto Show.)