Concept in name only; production model on the way. 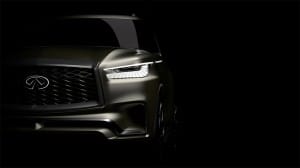 The mysterious Infiniti QX80 Monograph will make its debut in New York next week.

Infiniti has some big news coming at next week’s New York International Auto Show – big as in its largest SUV, the QX80.

An all-new version is reportedly on its way for the 2019 model-year, and the luxury arm of Nissan Motor Co. has confirmed it will be revealing a show car version in the Big Apple that it has dubbed the Infiniti QX80 Monograph.

The Japanese maker isn’t saying much about the Monograph, it’s press release even shorter than the latest White House tweet, simply declaring, “Huge unveil. 11 April 2017. New York.” But the teaser image and a little detective work offers a few hints of what’s to come.

The current QX80 is little more than an also-ran in a full-size SUV segment dominated by such domestic players as the Cadillac Escalade, and to a lesser degree, the Lincoln Navigator.

The Infiniti offering has opted for a distinctive – some would prefer terms like “quirky” or “controversial” – design language. With the Nissan luxury brand rolling out new styling cues on recent offerings like the QX50 Concept we saw at the Detroit Auto Show earlier this year, we can expect to see the updated QX80 adopt a similar visual theme. 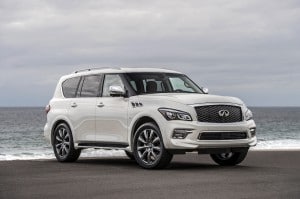 Infiniti launched the QX80 Signature Edition to give buyers a model with more luxury features.

The teaser image picks up on that with a long and more sculpted hood, a broad, diamond grille and cat’s-eye headlamps framed by L-shaped LED running lamps. The windshield, meanwhile, wraps around the A-Pillars.

There appears to be a broad new air scoop in the lower fascia, with big scoops directly below the headlamps. That would suggest that Infiniti isn’t cutting back on the power of the current QX80 – which is driven by a 400 horsepower 5.6-liter V-8. But considering the conflicting demands for more power and better fuel economy, it might be possible to see the maker opt for a different approach under the hood.

Downsizing is possible, that not all that likely in this segment. More in line with what competitors are doing – and what we have seen with other recent Nissan and Infiniti offerings, look for the QX80 to shed some weight, most likely through the use of new high-strength steels and other exotic materials. Considering what we saw with the maker’s smaller utes, it would surprise few if the QX80 Monograph were lightened by anywhere from 300 to 500 pounds.

As for the Monograph name, Infiniti has often used fancy monikers on its show cars, so that might just vanish when the production car is rolled out. On the other hand, it could also signal something big in the planning stage – much as the Q60 Project Black S unveiled in Geneva points to a new high-performance line Infiniti is developing.

Could we be seeing the first signs of a niche sub-brand, perhaps moving things a bit more upscale on Infiniti’s most luxury product lines? That appears one very distinct possibility here.

We hope to find out more in just over a week, while the production version of the next QX80 should be making its debut about a year from now.