“We wanted to deliver an exciting, expressive car." 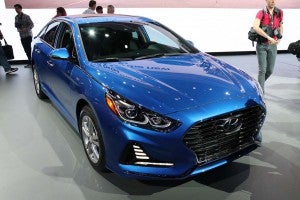 The 2018 Sonata update is designed to give more energy to its design.

Hoping to regain some momentum for its midsize sedan in a market rapidly shifting to SUVs, Hyundai has rushed a refreshed version of its midsize Sonata to market, giving media and potential buyers a first look at the New York International Auto Show.

The Sonata has traditionally been one of the Korean carmaker’s most important models but after scoring with an edgy design theme for the previous sedan, Hyundai took hits by opting for a more conservative design with the current model. The 2018 update intends to put Sonata back on track as one of the midsize four-door segment’s most stylish offerings.

“It’s about making an impact,” said Chris Chapman, lead designer at Hyundai’s U.S. design center. “We wanted to deliver an exciting, expressive car to…show the world how passionate Hyundai is about design and craftsmanship.”

As a mid-cycle update, Chapman and his team did face some limits on how far they could go. Key “hard points” of the Sonata’s architecture couldn’t be touched, notably the roofline, though the 2018 Hyundai Sonata does reveal tweaks to its front, side and rear, starting with the new “cascading grille” up front, on back to the new, slimmer taillights. 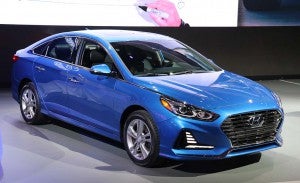 The Sonata has seen its sales slump faster than the overall midsize sedan market.

(Hyundai plugging in with array of upcoming electrified vehicles. Click Here for more.)

There are new chrome surrounds for the car’s windows – daylight openings, or DLOs, in designer speak – and new wheel designs.

Hyundai claims it has continued to work on the Sonata’s ride and handling, addressing what has traditionally been the brand’s weakest link. The torsion bar stiffness has been increased by 12%, for example, to improve steering. The rear suspension also has been updated, the maker notes, with thicker trailing arms to better handle suspension loads.

Under the hood, the 245-horsepower turbocharged 2.0-liter engine at the top of the Sonata range is now paired with an eight-speed automatic to improve mileage. Those turbo models get 18-inch wheels and tires.

Infotainment technology drives buyers these days, and along with the standard seven-inch color display, the maker is adding a second USB port up front, and an optional Qi wireless smartphone charging system. 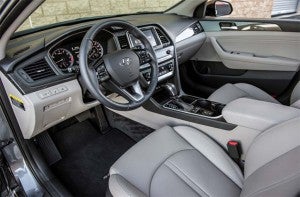 The interior of the '18 Sonata.

Hyundai also is upgrading Sonata’s safety technology. The car already offers seven airbags and a number of smart safety systems. It gets Blind Sport Detection and Cross-Traffic Alert for 2018, along with Lane Departure Warning.

The updated Sonata was not only designed but will also be produced in the United States. Look for it to go on sale towards autumn.

(Hyundai sibling Kia spices up Rio for NY Auto Show. Click Here to check it out.)