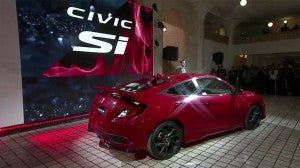 A concept version of the 10th-gen Honda Civic Si debuting at the 2016 LA Auto Show.

In another sign that the times, they are a’changing, Honda is turning to YouTube to reveal the production version of the new Civic Si on April 6, rather than waiting for next week’s New York International Auto Show.

Honda did go a more conventional route when it unveiled the Civic Si Concept at the Los Angeles Auto Show last November. But it only showed off a modestly disguised version of the Si Coupe. It’s kept everyone guessing about what the sedan version will look like.

Automakers are increasingly open to novel ways to get the message out, rather than having to fight for attention on crowded show floors. And so, with tech-savvy Millennials and Gen-Xers the target audience for the latest Civic variant, the YouTube launch is expected to connect directly with potential buyers for the 2017 Si.

The 2017 Civic Si is, for now, going to be the highest-performance version of the compact model line Honda has to offer, though we did get a look at the top performer at the Geneva Motor Show last month, where the Civic Type-R was formally unveiled. 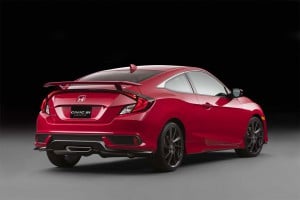 The production version of the new Honda Civic Si is expected to be close to the concept.

The Honda Civic Si will be offered in both two and four-door configurations. Both will be powered by a torquey, turbocharged and direct-injected 1.5-liter DOHC inline four mated to a short-throw six-speed manual gearbox. Power data hasn’t yet been released, though there was a leak suggesting torque will come in at, or around 192 pound-feet.

Whatever the final number, don’t expect the Si to threaten the Civic Type-R which, Honda said last month, will thrash out 306 horsepower, making it the most powerful version of the compact line ever to reach U.S. shores – indeed, the first Civic Type-R to make it into American showrooms.

For all but the most extreme performance-fixated buyers, however, the Civic Si should have plenty going for it. Among other things, it gets a new active damping system, new variable-ratio electric power assist steering, a helical limited-slip differential and other performance-enhancing features.

(What a gas! Click Here for a review of the hydrogen-powered Honda Clarity FCV.)

Dropped in-between the Civic Hatch Touring and the Type-R, the production version of the 10th-generation Si is expected to stick close to the look of the Civic Si Prototype that we first saw in Los Angeles. That’s been the pattern with all the Civic “concepts” since we saw the first prototype version of the new compact at the 2015 NY Auto Show.

Some of the key design elements will likely carry over to the sedan model, but Honda has intentionally kept the four-door Si shrouded in mystery. One of the other questions we expect to be addressed on YouTube is whether Honda will opt this time to offer a CVT alternative to the manual transmission that was the only choice for buyers of the first nine generations of the Si. 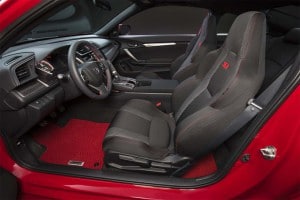 Inside the Civic Si Concept.

(Click Here for a look at the new Honda Civic Type-R.)

As for the interior, the concept featured such niceties as sports seats, a red TFT display and an aluminum shifter knob and pedals. The maker initially indicated that L.A. prototype was “close” to production, but whether the final version will also offer Dry Metal Carbon trim – either in standard or optional form – is another mystery.

Most of these questions should be answered during the Honda YouTube news conference scheduled to take place at 11 AM EDT, 8 AM PDT, on Thursday, April 6. Point your browser to hondanews.com/honda-automobiles/channels/civic-si.