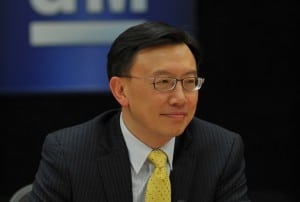 Matt Tsien, who heads up GM China, said the company will have an all-electric vehicle on Chinese roads within two years.

General Motors will have a pure electric vehicle on the road in China within two years and eight more will follow by 2020. The automaker is jump starting its efforts to keep pace with the Chinese government’s accelerating demand for EVs.

Matt Tsien, head of GM China, unveiled the plan during a press conference at the Shanghai auto show. He said GM expects annual sales of 150,000 electric and hybrid cars in China by 2020 and possibly in excess of 500,000 by 2025.

“In the next several years, out to 2020, we expect to launch at least 10 new energy vehicles into the marketplace,” said Tsien, using the government’s term for electric and hybrid vehicles. “We have a pipeline that is going to materialize, that’s going to put us in a very good position from a fuel economy requirement perspective.”

The announcement came as GM introduced the new Chevrolet Bolt, which will be sold as the Buick Velite 5 in China. The automaker is also showing off an EV concept, the FNR-X, at the show.  Initial impressions suggests it would go into the emerging market for downsized utes like the Toyota C-HR and Honda HR-V.

Ostensibly the crossover concept is being shown to gauge interest, but this move casts the vehicle in slightly different light, despite GM officials being noncommittal about it. To support the growth of its EV portfolio, GM built a battery assembly plant in Shanghai. It is expected to be delivering battery packs next year. 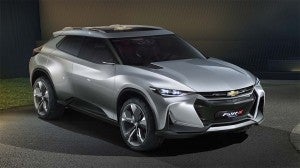 Officials says that the FNR-X isn't a sure thing for China, but at the Shanghai Motor Show purely to gauge interest.

Chinese regulators have passed some of the world’s toughest automotive emissions standards, hoping to address the country’s endemic smog problems. That has turned this year’s Shanghai show into a race to see which manufacturer has the latest and greatest zero-emissions vehicle technology. For the FNR-X, Chevy has opted for a plug-in hybrid driveline.

Chevy isn’t offering any details on what sort of system that would be, though one might suspect it would opt for a version of the plug-in tech used by the Chevrolet Volt. The X concept follows the debut of the original Find New Roads, or FNR, show car at Shanghai two years ago. What’s next is the obvious question.

“It’s a concept, right now, strictly for China, to gauge reaction,” said Randy Fox, a global Chevrolet spokesman. Take that as you will, though some reports have suggested that the FNR-X could wind up working the auto show circuit starting later this year.

GM isn’t the only automaker hustling to keep up.

(Click Here for more about GM and Ford’s plans for China.)

Facing strict new emissions rules that favor a shift to battery power Ford Motor Co. plans to roll out an assortment of new electrified vehicles for the Chinese market. 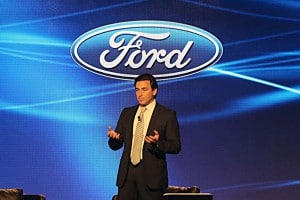 Ford CEO Mark Fields said the automaker will have electrified versions of its entire line-up ready for China by 2025.

Ford will have electrified versions of most of its offering in China by 2025, CEO Mark Fields announced, two weeks ahead of the Shanghai Motor Show. And it plans to start building them locally, as well.

In the U.S., Ford has launched an aggressive electrification program and already sells a mix of hybrids, plug-ins and pure EVs. Sales of its BEVs have been slower than expected, analysts suggesting range and price are problems. The maker is expected to mirror GM’s strategy with the Chevrolet Bolt EV and bring out a model with at least 200 miles range in the near future.

In China, the carmaker says it plans to have its first plug-in hybrid, the Ford Mondeo Energi on sale in 2018. It will follow with a fully electric SUV within five years, and have 70% of its models available with some form of battery-based driveline by 2025. Local manufacturing of electrified powertrains, meanwhile, will get underway by 2020, according to Ford.

Globally, the company said, it will spend $4.5 billion on electrification efforts. That is expected to include the development of 13 global EVs set to hit the road within the next five years.

The Chinese government also has taken steps to subsidize the manufacturing of electrified vehicles, automakers expected to pass such savings onto consumers.

(Ford will build EVs, plug-ins in China. Click Here for the story.)

While sales of electric vehicles haven’t grown as fast as the central government would like – mirroring the shortfall experienced under the Obama Administration – China is nonetheless the world’s largest market for battery-based vehicles, surpassing the U.S. in 2015. An estimated 500,000 hybrids, plug-ins and pure battery-electric, or BEV, models were sold there last year.