Concept A Sedan Debuts in Shanghai: a Hint of New Small Cars to Come?

“The time of the crease is over,” says design chief Wagener. 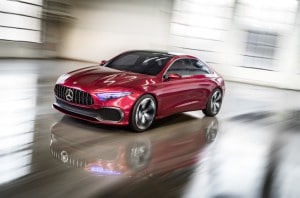 The Concept A Sedan reveals what is expected to be a new Mercedes-Benz design language.

Small is big at Mercedes-Benz, the German automaker planning to add three more compact models to its line-up in the “near future,” and the Concept A sedan making its debut at the Shanghai Motor Show this week offers some hints of what’s to come.

The concept sedan is a far cry from the ungainly, microvan-like A-Class model that first rolled off the assembly line in 1997. The overall shape has far more in common with the coupe-like Mercedes-Benz CLS and CLA models, though the aggressive nose picks up some of its cues from the Mercedes-AMG GT.

The Shanghai show car introduces what Mercedes is calling its “Aesthetics A” design language, something that expresses more of a “sensual purity” than existing models. And that suggests that what we’re seeing here will begin to influence not just the next generation of Mercedes small cars, but larger, higher-end models, as well.

While other luxury brands, notably Audi, have been adopting more angular and creased designs, the new Concept A opts for a more sensuously sculpted approach. Perhaps the more sharp-edged feature is the lighting, the headlights framing that broad overall grille before sweeping back into the front fenders.  It features a relatively vertical C-pillar and larger side windows than the current A-Class. 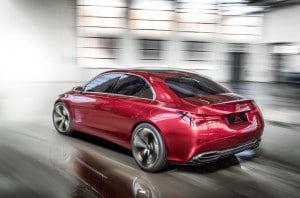 The Mercedes Concept A sedan seems bigger than its compact footprint would suggest.

“Our Concept A Sedan shows, that the time of creases is over,” said Gorden Wagener, Daimler AG’s Chief Design Officer, ahead of the Shanghai debut. “With its perfect proportions and a sensual treatment of surfaces with reduced lines, it is the next milestone of Sensual Purity and has the potential to introduce a new design era.”

The sedan measures 179.2 inches in length, 73.6 inches in width, and 57.6 inches in height. The overall look is a better-proportioned sedan than the current A-Class, an image enhanced by the concept’s  broad grille, oversized front air ducts, wide rear diffuser – and 20-inch wheels.

Those are rather large for a production compact model but far from out of the question. In fact, with the exception of the flush-mounted door handles and slightly undersized side mirrors, the Concept A sedan looks like it could start rolling off the assembly line right now.

The Concept A leaves a number of questions unanswered. The front ducts and tailpipes, as well as the powerdome bulge in the hood suggest this could be a prototype of an AMG edition.

What is clear is that Mercedes has been scoring with its latest generation of small cars, selling more than two million compact models since 2012. That includes not only the A-Class but the B-Class, CLA, CLA Shooting Brake and GLA crossover.

And more are on the way, said Britta Seeger, the board member responsible for Mercedes-Benz global marketing and sales, told TheDetroitBureau.com during an appearance at the North American International Auto Show in Detroit last January. 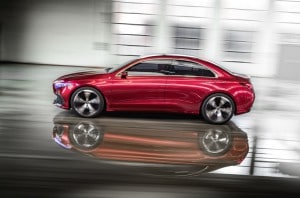 A far cry from the original A-Class.

With the launch of the new Concept A this week, Seeger said Mercedes is “extremely confident that the planned expansion will lead to a continuation of this success story.”

Not all the existing compact models are shipped to the U.S. The A-Class is notably absent, while the Mercedes B-Class is offered only in battery-electric form in California. Don’t expect to see them come to the States anytime soon, Mercedes insiders caution – especially at a time when American buyers have been moving from small passenger cars to SUVs and other light trucks.

The more likely option – for the U.S., anyway – would be the CLA Shooting Brake and perhaps new variants of the GLA. Don’t be surprised if they pick up, nonetheless, on the design cues first shown on the Mercedes-Benz Concept A.