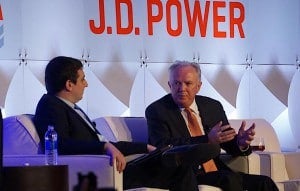 AutoNation CEO Mike Jackson (right) said today that Tesla was overvalued while GM was just the opposite.

While Jackson’s view is held by plenty of industry folks, at least one auto executive believes that Tesla’s current valuation is rooted in something substantial. Mark O’Neil, COO of Cox Automotive, noted that Tesla is changing consumer expectations of the automotive retailing experience.

However, Jackson’s belief may be more rooted in the perspective that the traditional U.S. automakers are currently undervalued. He said today’s reality is that, “Gas is affordable as far as the eye can see.”

Thanks to increases in U.S. oil production through “fracking,” the risk of gas shortages and energy shocks, which have haunted the auto industry ever since the 1970s, has dramatically diminished, Jackson noted.

(Tesla on top as the most valuable U.S. automaker. Click Here for the story.)

In turn, this is leading to a major structural shift towards trucks and sport utility vehicles that will benefit companies such as General Motors and Ford Motor Co., which in the past have been battered by sudden shifts in gas prices. The shift also shows every sign of being permanent, said Jackson, who is one of the industry’s most outspoken executives.

“GM is undervalued and Tesla is overvalued,” Jackson said, because of the emerging trends, which have made it less expensive to drive an efficient truck or SUV. Consumers like those vehicles,” he added.

“The value of Tesla is just inexplicable,” he suggested, noting that the stock market now indicates Tesla is more valuable as Ford and roughly equal in value to GM.

Jackson added the valuation is even more puzzling because it is facing rising competition from other automakers.

John Murphy, the top auto analysts at Merrill Lynch, said, “at some point you have to go cash flow positive. The 20% surge appears to have been driven by the appearance of a major Chinese investor that appears willing to pour more cash into the business.

O’Neil, however, said that Tesla has benefited enormously from its sales process, which is centered around the customer.

Online retailing has grown by 15% per quarter for more than a decade and the pressure to adapt automotive retailing to an online model is steadily increasing, O’Neil added, noting that businesses as different as mortgage origination and pizza delivery have moved online.

Michael Montani, managing director for Evercore, said millennials want to use digital channels to complete their transactions and one in five millennials surveyed by his firm indicated they would like to purchase a vehicle from Amazon.