VW Goes from Concept to Production with new Arteon Flagship

U.S. buyers will have to wait a year. 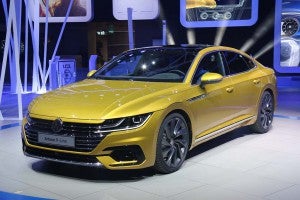 Larger and more lavish than Volkswagen’s midsize Passat, the all-new Arteon making its debut at the Geneva Motor Show will serve as the German maker’s new design and technology flagship.

First shown in concept form as the Sport Coupe Concept GTE at the 2015 Geneva show, the production version of the VW Arteon takes things a step beyond the old coupe-like Volkswagen CC, with what the German maker is billing as a more “progressive,” luxurious design, both inside and out. Add to that a broad complement of high-tech features, from the continuously adjustable suspension to its Digital Cockpit system.

“Many of the features and details from the concept car have now made it into production,” said Elmar Lizharz, program manager for the new Arteon.

But American motorists will have to wait a year to confirm that fact. While VW will start taking advance orders for the Arteon in Europe this week, the new model won’t reach U.S. showrooms until mid-2018, according to Lizharz. 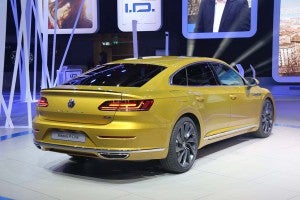 VW's new Arteon full-size sedan is a step above the Passat, but won't hit U.S. shores until mid-2018.

When the concept version was first unveiled, there had been some speculation Arteon foreshadowed the long-awaited replacement for the old Phaeton, the first true luxury car to carry the Volkswagen badge. While it will be “one segment above the Passat” in terms of pricing and features, Lizharz told TheDetroitBureau.com that it won’t be a true luxury model.

“This is how we are challenging the premium carmakers without becoming one ourselves,” he said, noting that a base version of the Arteon will go for 35,000 Euros, or roughly $37,000 at current exchange rates. That’s significantly less of a premium than the old Phaeton carried.

Based on the same modular MQB architecture used for the majority of the VW brand’s other models, the Arteon is stretched several inches longer than the Passat, to 191.4 inches; while its 111.9-inch wheelbase providing a full-size interior that can seat up to five. The Arteon is 73,7 inches in width and stands 56.2 inches. Depending upon seating configuration, Arteon delivers up to 55 cubic face of storage. 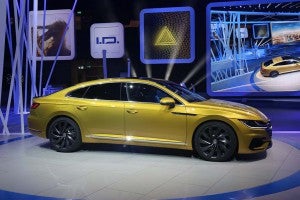 The new Arteon features a coupe-like design that allows for plenty of passenger room on the inside.

The Arteon bears a subtle resemblance to the latest-generation Audi A7, with a long, coupe-like roofline that flows into a large hatchback. “This gran turismo provides more space and flexibility than conventional sedans,” said Tobias Suhlmann, the designer responsible for the car’s exterior.

The sedan gets VW’s latest face, with a series of chrome crossbars framed by cats-eye LED headlamps and LED running lights. The athletic appearance is enhanced by the 20-inch wheels shown in Geneva. The base model features 18-inch aluminum alloy wheels.

Inside, VW has kicked things up a notch, with upscale details like Arteon’s stainless steel kickplates and “aluminum-look” pedal covers on the R-Line version. 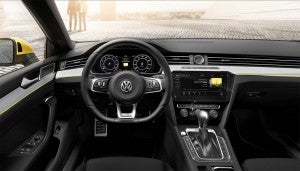 The new Arteon features a load of new technology, including a 9.2-inch touchscreen that can be paired with a head-up display.

The 9.2-inch center console screen can be paired with a head-up display and Arteon brings gesture controls into a more mainstream market segment. Things like volume can be adjusted with a simple hand movement, a technology first introduced on the latest-generation BMW 7-Series less than two years ago.

There are numerous other technologies, including Active Cruise Control that can adjust the vehicle’s speed according to changes in speed limits. An updated Emergency Assist system will automatically slow the car down and attempt to steer it to the side of the road if the driver becomes incapacitated.

As for powertrains, VW will offer six options, including a mix of diesels and gas engines. While final details have yet to be worked out, Lizharz said it is unlikely any of the oil-burners will be brought to the U.S. market.

In the wake of the maker’s diesel emissions scandal, VW brand boss Herbert Diess said he does expect any diesels to return to the U.S. 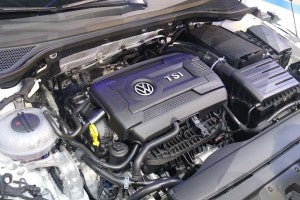 The Arteon has a mix of six different gas and diesel engines, but the oil burners are likely only for Europe.

More likely said Lizharz, there will be two gas engines for the States, including a turbocharged, 2.0-liter four making 276 horsepower.

It will be paired with a DSG dual-clutch gearbox, with VW’s 4Motion all-wheel-drive system standard.

The Arteon’s planned arrival in the U.S. could pose some challenges, especially if the American market continues shifting from cars to SUVs and other light trucks which, last month, accounted for nearly two-thirds of new vehicle sales.

VW doesn’t expect particularly large sales numbers, said Lizharz, but “We still think Arteon will be very important to show what VW is capable of doing.”