Airbag defect the root of the largest safety scandal in automotive history. 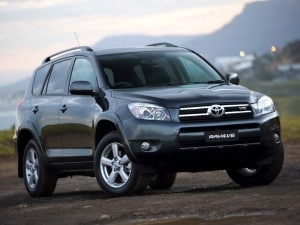 The Toyota RAV4 gets hit with a big recall due to faulty Takata airbags.

It is the latest in what is expected to be a continuing series of recalls related to airbag inflators that can, under some circumstances, over-inflate, sending shrapnel into a vehicle’s passenger compartment following a crash. At least 16 deaths have been associated with the Takata debacle, most of those in the United States.

All told, about 100 million of the airbags are being targeted for recall, though some vehicles use multiple Takata devices. In the U.S. alone, the recall as so far impacted about 40 million vehicles, but millions more are expected to be added to the list over the next several years.

The latest recall by Toyota covers two models: the popular RAV4 crossover-utility vehicle, as well as the Corolla Axio sedan. Vehicles sold in the U.S. are not affected by this latest announcement, but it covers those sold in Japan, China, Oceania and several other markets.

The defect was initially blamed on problems at Takata plants in Mexico and the U.S., and it was first thought to affect airbags used in regions with high humidity and temperatures, such as southern Florida.

But a number of malfunctions, along with some fatalities, have occurred in drier, cooler regions. A research panel funded by a consortium of Takata customers subsequently concluded that millions more of the company’s airbag inflators were prone to failure due to their basic design. Over time, the explosive ammonium nitrate used to fill a bag in the event of an accident is prone to break down and misfire.

The National Highway Traffic Safety Administration has upgraded the recall order on several occasions. A year ago, it added tens of millions more vehicles to the list. But it also announced that it would let manufacturers stage repairs over a several-year period, focusing initially on older vehicles sold in high-humidity environments.

That approach reflected the struggle Takata faces coming up with enough replacement inflators – and the challenge manufacturers have had to deal with, clearing space at dealer service bays to handle all the repairs.

Toyota is one of several manufacturers that have sought out secondary sources for replacement parts.

Last month, Takata pleaded guilty to felony changes in U.S. District Court in Detroit. It agreed to a $1 billion settlement that included fines and partial restitution for the costs its customers have incurred.

It also agreed to set up a victims’ compensation fund run by Kenneth Feinberg. He handled similar programs for General Motors to compensate victims of its faulty ignition switch, as well as funds for 9/11 victims and those impacted by the BP Gulf oil spill.