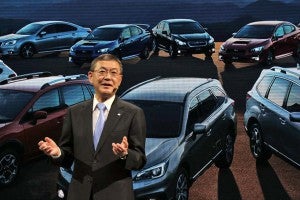 With the effort of about the stroke of a pen, years of wondering and waiting ended: Staring April 1, all Subarus will now be built and sold by … Subaru Corp.

Fuji Heavy Industries Ltd. changed its named to Subaru Corp. matching the moniker that’s adorned its much-beloved vehicles for decades. The move was not a surprise as officials announced last summer that it would change the name at some point in the future.

“We have long strived to make excellent products,” said Fuji CEO Yasuyuki Yoshinaga said in a statement about the transition.

“In recent years, our effort has been expanded from making good products to delivering distinctive value which only Subaru can bring to customers. This change in company name declares Subaru’s determination to thrive as a brand that delivers value.”

(Subaru XV set to cross Atlantic as next Crosstrek. Click Here for the story.)

The company held a ceremony marking the occasion at its headquarters in Tokyo as well as three other Japanese facilities on Friday. The former Fuji Heavy Industries actually produces a variety of products, including helicopters and other industrial products.

However, the vast majority of its revenue is derived from its automotive business. However, Fuji Heavy Industries wasn’t even the company’s original name.

In 1953, five Japanese companies merged to form Fuji Heavy Industries Ltd. The new corporation adopted the “Subaru” cluster of stars as the official logo for its line of automobiles. The company produced its first automobile in 1958. It was named the Subaru 360.

(Click Here for details about Subaru giving the Legacy a mid-cycle makeover.)

Subaru of America Inc. landed in Pennsylvania when Harvey Lamm and Malcolm Bricklin set up the organization to be the exclusive seller and marketer of Subaru cars. At the time, the company was the only American-operated, publicly held import car company.

Before it went public, the company was worth $12,000, according to Subaru. Lamm ran the company until 1990, when Fuji Heavy bought the company’s outstanding shares. The first Subaru sold in the U.S. was the 360 Mini. It was powered by a two-stroke engine. It got 66.3 mpg and cost $1,290.

It was $300 cheaper than the similar-looking Volkswagen Beetle and was 1,000 pounds lighter. This made it exempt from federal safety standards, and the car was required to meet only the less-stringent standards of individual states. In contrast to the company’s modern reputation for safety, Consumer Reports rated the 360 as ”unacceptable”, which quickly affected sales.

Global sales for 2017 are expected to nearly 1.1 million, marking the sixth year in a row of rising sales. The U.S. and Canada drive the vast majority of those sales and are expected to exceed 920,000 unit this year.