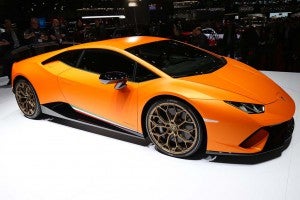 The new Lamborghini Huracan Performante hit the stage at the Geneva Motor Show.

Lamborghini’s new Huracan Performante recently lived up to its name by setting the new single lap record at Germany’s Nurburgring and now that its hit the stage at the Geneva Motor Show, it’s apparent why.

This iteration of the Huracan has been been re-engineered from the ground up, cutting weight, improving engine power and chassis performance, and adding a slew of active aerodynamic technologies to make this snarling beast go.

The new record is 6:52:01 besting the previous holder, the Porsche 918, and the key to the new vehicle may be the aforementioned tech.

Though engineers cut 88 pounds from this version of the Huracan using carbon fiber for a variety of components, its Lamborghini’s Aerodinamica Lamborghini Attiva, or ALA, that helped push it around the Nordschliffe at never-seen-before pace.

(New McLaren 720S storms into Geneva. To get a look, Click Here.)

The car use front and rear spoilers with electronically actuated flaps that make real-time adjustments based on vehicle speed. If the ALA is off, downforce increases exponentially, dramatically improving cornering capability at high speeds.

When the system activates, the flaps open, which permits air to flow through special channels under the car, reducing drag and optimizing acceleration.

On the back of the Performante are two ducts that are always open to allow for improved engine ventilation and cooling. Additionally, the ducts connect to inner channels to the rear spoiler, which is controlled by two flaps. 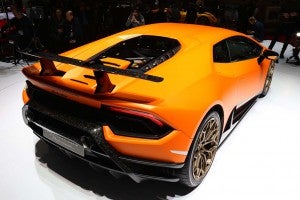 (Click Here for details about Ferrari’s new 812 Superfast in Geneva.)

When closed, the pieces operate as one wing in a standard position, increasing the downforce by 750% compared with the standard Huracan, which certainly improves performance in the corners and curves, helping to keep speed high.

When the throttle is open, the flaps open to let air flow through ridges under the wing. This reduces drag and improving speed. Finally, the flags can detect when the car is turning and adjust to maximize downforce in those situations.

The new look isn’t just limited to the exterior: forged composite air vents, door handles, center console and paddles act as a contrast to the dark Alcantara suede seats and interior fabric. The digital cockpit can configured depending on which of the three driving modes – Strada, Sport or Corsa – is selected.

(Audi RS 5 Coupe sates the need for speed. Click Here for the story.)

The new Huracan blows into dealers this summer for cool $274,390 starting price — without the destination charge.