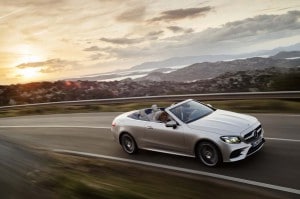 The new E-Class Cabriolet will feature a 329-hp twin-turbo V-6 in the U.S. market.

Like an old-fashioned fan dancer, Mercedes-Benz has been giving us a slow tease of the new 2018 E-Class Cabriolet set to make its formal debut at the Geneva Motor Show next week.

We’re finally getting the full story on the 2018 Mercedes E-Class Convertible, and there are a number of positive selling points: the ragtop not only growing longer and wider than its predecessor, but getting a twin-turbo V-6 that can be used to power all four wheels for the first time.

And, as you’d expect from Mercedes, the midsize cabriolet will now adopt a wide range of safety, comfort and convenience technologies first seen on the bigger S-Class and upgraded with last year’s makeover of the E-Class sedan.

The ragtop becomes the fifth member of the all-new E-Class family, following last year’s roll-out of the latest sedan model and, just two months ago, the latest coupe remake. 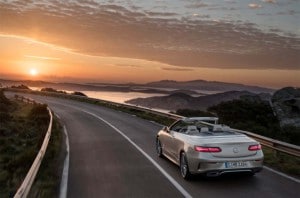 The new E-Class Cabriolet will now be offered with a choice of rear or all-wheel-drive.

The design of the 2018 Mercedes E-Class Cabriolet won’t come as much of a surprise, largely picking up on the two-door’s styling. The convertible is distinguished by its LED headlights, black diamond grille, and wraparound taillamps, as well as twin chrome exhaust tips.

The German maker retained the outgoing cabrio’s softtop, which will now be available in black, dark blue, red or dark brown. It can be opened or closed in just 20 seconds and operates at vehicle speeds of up to just over 30 mph.

Better yet, the new model gets a version of the Mercedes neck-scarf system that helps keep passengers cool on hot days and warm the rest of the year. There’s also an electrically operated wind blocker behind the back seats. Those features should make it possible to roll back the roof in all but the most inclement of weather.

Inside, the new convertible gets all the luxury touches you’d expect of a Mercedes E-Class, including four standard leather color choices and three more for those who upgrade to the Napa leather option. There’s also seven wood trim choices.

The E-Class sedan introduced Mercedes’ midsize buyers to a range of high-tech features, many of them first seen on the 2015 S-Class remake. That includes the latest version of the COMAND infotainment system allowing drivers to enter commands through the familiar rotary knob, a touchpad or by voice. There’s now a new 12.3-inch touchscreen, as well. 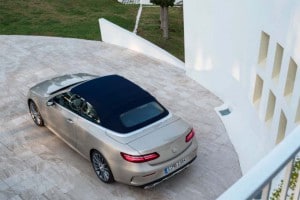 The cabrio's top can be opened or closed in 20 seconds, at speeds up to 30 mph.

Among other things, the new cabriolet now can be operated for nearly a minute in hands-free mode on select, limited-access roadways. That’s on top of a range of digital safety technologies, including a collision warning and autobraking system that can detect pedestrians and stop and start the car in heavy traffic.

Mercedes has lined up an array of different powertrains for different global markets. In the U.S., buyers will get a 3.0-liter twin-turbo V-6 making 329 horsepower and 354 pound-feet of torque. The engine is mated to a new nine-speed automatic gearbox and, for the first time on the E-Class Cabriolet, it can be configured in either rear- or all-wheel-drive.

The Cabriolet will go on sale in Europe shortly after next week’s debut, following into the American market later this year. Pricing will be announced closer to that time, but is expected to come in slightly higher than the current, $62,600 U.S. base.