No need to stick out your thumb when it can press the button to call this driverless vehicle. 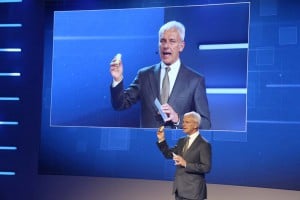 Need a ride? Don’t stick out your thumb. You won’t have to bother with a smartphone app, either, not if Volkswagen’s vision of the future comes to pass. You’ll just have to press a button to summon Cedric.

That’s the name of the prototype robotic car that Volkswagen revealed during a preview of the Geneva Motor Show Monday night. Using artificial intelligence and an array of sensors, Cedric is designed to roam the streets like a driverless cab, quickly responding when an owner or user taps the button on a small fob.

“This button will provide individual mobility for everyone,” explained VW Group CEO Matthias Mueller, as he held up one of the little fobs which is about the side of a computer thumb drive.

Once inside, “You talk to Cedric as you would your personal assistant. All is voice controlled,” Mueller said, noting that you not only can tell the self-driving vehicle where to go but what sort of route to take, whether the quickest or the most scenic.

(VW goes from concept to production with new Arteon flagship model. Click Here for the story.) 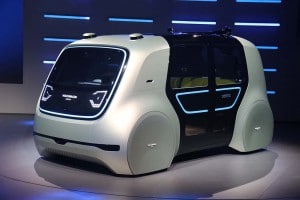 VW's new Cedric prototype robotic car is an autonomous vehicle that is voice-controlled by using a fob the size of a jump drive.

Volkswagen is just one of the many established automakers working on autonomous driving technology – along with new entrants, such as Tesla, as well as technology and parts companies like Google’s Waymo and auto supplier Continental-Teves. But most of their prototypes are simply modified versions of today’s cars. The Volkswagen Cedric gives a hint of how both autonomous and electric powertrain technologies are expected to radically change tomorrow’s automobiles.

The VW prototype is built on a new platform, dubbed the MEB, that will be used for a wide variety of pure battery-electric vehicles. The Volkswagen brand expects to have 30 BEVs in its line-up by 2025, noted Mueller.

By mounting the batteries into the MEB’s floor and electric motor – or motors – onto the axle, VW can eliminate the need for an engine compartment. So, about the size of today’s subcompact VW Polo, Cedric’ cavernous interior can readily hold four passengers and plenty of cargo. 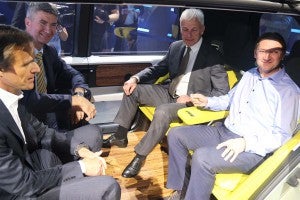 The prototype shown in Geneva has a 49 kilowatt-hour battery, Ulrich Eichorn, the executive overseeing VW’s battery and autonomous technologies, told TheDetroitBureau, “but it can go all the way to 100.” That would suggest a range of anywhere from 150 to more than 300 miles in around town service.

Both Mueller and Eichorn cautioned that Cedric isn’t ready to report for duty just yet. A production version would need to meet what, in industry lingo, is called Level 5 automation, meaning it would be able to operate without a driver under all circumstances and anywhere necessary. Right now, there are still some situations that pose too great a challenge: including severe weather conditions and dense urban traffic.

Autonomous vehicles, in general, will likely roll out in stages, suggested Mueller, starting with limited hands-free driving like the technology that will be offered on the next-generation flagship sedan from VW’s upscale brand, the Audi A8, coming in the next year.

(To see more about other autonomous research vehicles, Click Here.)

“The self-driving car is more of a fascinating promise for now,” said Mueller, “but I am convinced the first, highly automated vehicles will be on the road in a few years. And self-driving cars, (like Cedric), with no pedals will be a common sight in the not-too-distant future.”