Infiniti Taking F1 to the Street with Project Black S 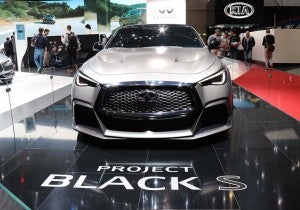 The Infiniti Q60 Black S is just a concept - for now, but company officials want to build it.

Infiniti has long been envious of rivals like Mercedes and BMW, with their high-performance sub-brands AMG and M, but the Japanese maker hasn’t been able to come up with the right formula for its own sports line.

It spent a couple years toying with the Eau Rouge concept, but now it’s moving from red to black – Project Black S, that is – and may have found a performance concept it can call its own. The Geneva Motor Show marks the debut of Infiniti’s Project Black S, with a specially modified version of its Q60 using an electric boost system derived from the maker’s Formula One program. 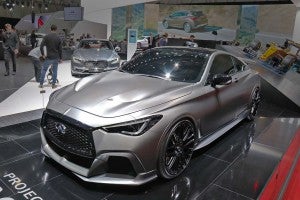 The old adage says, “there’s no replacement for displacement.” But, with rare exception, more and more of today’s extreme machines rely on turbos and superchargers to squeeze maximum performance out of their internal combustion engines. That does have its downside. Turbochargers, in particular, suffer from dreaded turbo lag, and engineers go to great lengths to minimize that pause between the time you push pedal to metal and the requested surge in power.

As Krueger pointed out, electric motors deliver maximum acceleration the instant they start spinning. That’s why the Tesla Model with optional Ludicrous Mode S can launch from 0 to 60 in a mere 2.8 seconds, and why a prototype of the Faraday Future FF91 recently ran the traps in just 2.38 seconds. In production, it would be the world’s fastest car off the line.

While Infiniti is reportedly working up a pure battery-electric vehicle – sharing technology with its parent, Nissan, the maker’s approach to performance focuses on using battery boost. Where some makers – think Toyota – have focused their hybrid efforts on maximizing mileage, Project Black S is putting a premium on power. And, oh, if they can also improve fuel economy while cruising or crawling around in traffic, all the better.

The prototype unveiled in Geneva is equipped with a 3.0-liter twin-turbo V-6. But it’s paired with a KERS, or Kinetic Energy Recovery System, hybrid package derived from the Renault F1 program. (The French automaker the other half of the Renault-Nissan Alliance.) KERS has revolutionized Formula One, both by delivering more power on the track while also helping boost range a bit.

At their most basic, these systems are high-performance alternatives to Toyota Prius-style hybrids. They regenerate energy normally lost while braking, while also capturing power from exhaust gases – much like a turbo, but here turning it into energy to charge a battery pack. In turn, that energy can be reused when a burst of acceleration is needed, helping drive both the crankshaft and the car’s electrified turbos. 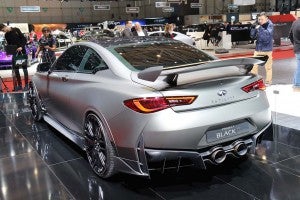 The KERS system would likely cut a second or more off the Q60's 0-60 times.

The Q60 is already a reasonably quick car, hitting 60 in about 5 seconds, but the KERS system would cut at least a second or more off launch times, and bring the car up to somewhere in the 400 to 500 horsepower range.

Automakers frequently talk translating track technology into road-going hardware, but it isn’t easy, especially if you’re starting with as exotic a series as Formula One. And it’s one thing to do that with a Mercedes-AMG GT or Aston Martin Valkyrie – both also tapping F1 systems – another to put it into a more mainstream luxury brand like Infiniti.

(Click Here for more on the 4-door Mercedes-AMG GT Concept.)

The modified Q60 is about more than just what’s under the hood, incidentally. It also features a modified body design developed at Infiniti’s design studio in London that puts a premium on reduced wind drag and increased downforce. That includes front air vents and side skirts. And the Black S model gets unique 21-inch wheels, Brembo brakes and “blued” titanium tailpipes.

For now, the official stand is that Project Black S is still a concept. But Krueger is nothing, if not adamant about making it a reality. “I want to make it,” he declared.

We could hear more about the Black S project in the not-too-distant future.

(Click Here to check out the 1,000-hp Aston Martin Valkyrie.)