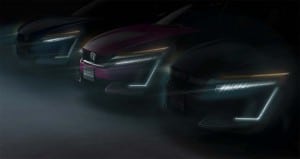 Honda teases the three versions of the Clarity model it will show off at the 2017 NYIAS.

The first version of the new Honda Clarity has only just gone on sale but Honda is already rolling out two other variants.

With the Clarity FCV, Honda became the third automaker to launch a fuel-cell vehicle in the U.S. market last year. Now, it says, it will debut both the Clarity Plug-in Hybrid and the Clarity Electric at the 2017 New York International Auto Show. All three models are based off the same, unique midsize platform, and all are equipped to carry five passengers.

Honda boasts Clarity will be “the first vehicle series to offer customers an expanded array of electrified vehicle choices with fuel cell, battery electric and plug-in hybrid powertrains.” But other makers are also working up multi-use platforms, including both Hyundai and its Korean sibling Kia.

The first version of the Clarity relies on a hydrogen fuel-cell stack for power. On the plus side, it’s capable of running up to around 300 miles on a tank, and it can refuel in barely five minutes. The downside is that there aren’t many places to fill up, with only a handful of hydrogen pumps open to the public, primarily in Orange County, the San Francisco Bay Area, and California’s capital city of Sacramento.

The fuel-cell version of the Clarity.

The two new models give green-minded buyers two other options.

The Honda Clarity Electric can take advantage of the fact that there’s a rapidly growing network of public charging facilities across the United States, and it has become more affordable to drop a charger into individual homes. That availability is one of the reasons why Boston Consulting and other research firms are expecting a huge surge in demand for battery-electric vehicles over the coming decade.

But the other factor that’s expected to strongly influence demand is range. And here is where the Clarity Electric may fall short. Honda is withholding most technical specs until the NYIAS introduction, but it has been widely reported that the battery-electric version will yield only 80 miles per charge.

That has left some observers scratching their heads. Though 80 miles would be able to handle the driving needs of most U.S. buyers, the general consensus is that most Americans won’t consider an electric until the number climbs north of 150 miles, and 200 seems to be the sweet spot that many are going for, especially with “affordable” models like the new Chevrolet Bolt EV and the upcoming Tesla Model 3.

(Infiniti among automakers turning to F1 hybrid tech to boost performance. Click Here for the story.) 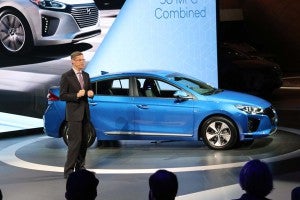 Hyundai's Mike O'Brien introduces the Ioniq EV at the LA Auto Show. There will soon be three versions.

For those who make range a priority, there’s the Honda Clarity Plug-in Hybrid. This model will get about 40 miles range per charge – but it will then be able to fire up its gasoline motor and continue to run as long as there is fuel in the tank.

Many analysts believe that plug-ins will be the more popular solution, at least in the near to mid-term. That’s echoed by the flood of new models soon coming to market. Mercedes-Benz, for example, plans to have 10 PHEVs in its global line-up by the end of the year.

Honda notes the Clarity Plug-in Hybrid “will launch in all 50 states and will be the volume leader in the series.” That suggests the maker might offer the Clarity Electric in only a handful of states, such as California, that have in place new zero-emission vehicle, or ZEV, mandates.

In January, during a media roundtable at the Detroit Auto Show, Honda CEO Takahiro Hachigo expanded upon earlier statements, noting the maker expects to offer a wide range of “electrified vehicles which, will account for “two-thirds of our vehicles (by sales)…by 2030.”

Meanwhile, other makers are planning to copy the Honda strategy of offering multiple green powertrain options off a single platform. Hyundai, for example, will offer a conventional hybrid, a plug-in and a pure battery-electric version of its new Ioniq by late next year. Kia will have two versions of the new Niro.

Meanwhile, Volkswagen says it will use its all-new MEB architecture for most, if not all, of the 30 plug models it plans to have in production by 2025.