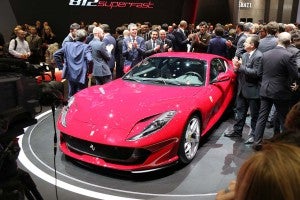 Ferrari unveiled its new 812 Superfast at the Geneva Motor Show. It includes a new "first" for the maker: electric power steering.

With Ferrari, “fast” might as well be part of the company name. Then there’s Superfast – or more precisely, the Ferrari 812 Superfast making its debut at this year’s Geneva Motor Show.

Its big V-12 capable of launching the sleek, rear-engined belle macchina from 0 to 100 kmh (62 mph) in a mere 2.9 seconds, the new model would seem to be classic Ferrari.

But there’s just enough of a nod to broader auto industry trends that could shake up some purists: the 812 Superfast marking the first time Ferrari has ever, gasp, used electric power steering.

The crowds at Ferrari’s Geneva Motor Show news conference were so thick one might have been forgiven for wondering if there was actually a Superfast on the stand, but as they slowly parted one could catch a glimpse of the 812, in all its eye-popping Rosso Settanta glory.

The Superfast is, in essence, a more radical take on the F12 Berlinetta. Ferrari modestly boasts that the 812 will deliver “thrilling top-end performance,” Enrico Galliera, Ferrari’s chief marketing officer, proclaiming that the new supercar “has the most powerful engine we ever designed, with super high speed and higher performance.” 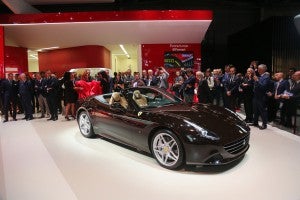 Ferrari has been on a run of exciting new products, such as its fastest convertible ever: the LaFerrari Aperta at last year's Paris Motor Show.

That’s not quite accurate, as the Superfast can only muster a mere 789 horsepower – and 530 pound-feet of torque – compared to the 949 hp of the La Ferrari.

The good news is that it is expected to be significantly less expensive than the $1.4 million La Ferrari. The Italian maker hasn’t said what it will be asking for the Superfast, but you can be sure it will carry a steeper price tag than the $320,000 F12.

That rear-mounted engine you glimpse through a glass cover is a 6.5-liter V-12. It has undergone a number of tweaks to make its numbers, including revisions to the intake and combustion systems.

Being fast, these days, is about more than just straight-line performance. And Ferrari says it has also made major improvements to the suspension and steering systems for the 812. It might come as a shock that this includes the first application of electric power steering in a Ferrari. But that’s to be expected as even such low-volume makers must adapt to the times – and cope with emissions and mileage mandates.

The good news is that the latest EPS technology is getting good marks for duplicating the feel and functionality of classic hydraulics. Even supercar rivals like Aston Martin – with the new DB11 – are taking the plunge.

To complete the package, Ferrari has also upgraded the interior on the 812, notably including its technology.

The Ferrari 812 Superfast will go on sale in the U.S. later this year. Pricing will be announced closer to that launch.