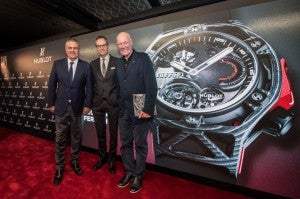 Long considered one of the world’s premier automakers, Ferrari is celebrating its 70th anniversary this year. Of course, any auto aficionado worth his or her salt is desperately searching for a way to take part in this milestone.

Naturally, the first impulse is to simply got out and buy a new Ferrari. Of course, there is that issue of what one to get: LaFerrari? California? 488 Spider? All fine choices, but even with the production increases pushed through by Sergio Marchionne, it’s unlikely you’ll get behind the wheel of a new model this year.

The used market is always a possibility, but who wants to scour Craigslist or Autotrader for a used Ferrari. The cheapest one currently on Ebay Motors – a 1994 348 in red, of course – has a “Buy It Now” price of $64,995.

Fear not! Ferrari has a simpler way for Prancing Horse mavens to get their Ferrari fix. It has partnered with watchmaker Hublot on a new original collection of watches. Since a recent Bloomberg report that noted the Italian sports car maker nets an average of $90k on each car it sells, also noted that 30% of its overall revenue comes from non-vehicle offerings — including watches.

(Ferrari pushes the ragged edge with the new 812 Superfast. To get a look, Click Here.)

The Techframe Ferrari 70 years TourbillonChronograph opens a new chapter in the partnership that unites Hublot and Ferrari and is available in three versions – King Gold, PEEK Carbon, and Titanium – each of which is produced in 70 limited editions. It is destined to be a collector’s item, claim Ferrari executives. 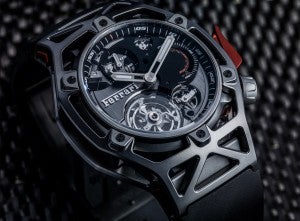 Bear in mind, it’s a Ferrari so “inexpensive” will not appear as part of the description. The trio starts at $127,000 for the titanium version and $158,000 for the king gold version. A version made of PEEK (Polyether Ether Ketone), a type of carbon fiber, is priced at $137,000.

While many accessories are created by outside companies, Ferrari designed the series. A team effort that began with Ferrari in Maranello and ended in Nyon with Hublot producing the line.

“This new line in Hublot’s collections is intended to offer a watch that is deeply rooted in Ferrari’s DNA-combining strength, performance and agility-while being produced and perfected by the Hublot manufacture. A perfect fusion of the automotive and watchmaking worlds,” says Ferrari in a release.

The starting point for the designers was the Hublot movement – the “engine” of the watch – around which they freely designed a high-performance chassis. Like that of a Ferrari, its lattice structure-that is unique in the world of watchmaking-offers maximum strength for minimal weight.

“The styling of the Techframe Ferrari 70 Years Tourbillon Chronograph underlines the performances of the watch and no component is there by chance”, explains Manzoni.

Thus, the black structure on the dial holds the chronograph counters and offers excellent legibility. The crown at 4 o’clock -raised by a black PVD Titanium insert decorated with the famous Prancing Horse-reduces the size of the watch to the greatest possible extent, and increases its aerodynamic look. Finally, the red push-button is strategically placed to facilitate its use-even when driving-and makes the design more ergonomic.

If this doesn’t do it for you, there’s always a trip to Ferrari Land! Grab your passport though — it’s just outside of Barcelona, Spain. It opens on April 7 and a one-day ticket can be had for just 60 euros, or about $70.