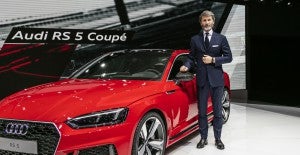 Audi appears to be trying to make a point with the introduction of its new RS 5 Coupe — it’s fast.

The new RS 5 Coupe was introduced at the Geneva Motor Show at the same time as the racing version of the RS, the RS 5 DTM and its engine putting out more than 500 horsepower.

“This is a special day for me and everyone involved in the DTM project,” says Head of Audi Motorsport Dieter Gass. “For the first time, we developed a new DTM car in parallel with the production model. This underlines once again how closely motorsport and production work together at Audi.”

So closely that Audi executives describe the new RS 5 as the “Gran Turismo” of the maker’s line-up. That could simply be a reference the roaring beast that resides under the hood. The coupe is powered by a completely redeveloped 2.9 TFSI V6 biturbo generates 450 hp of power and delivers a maximum torque of 445 ft-lb.

The top model in the A5 family, the RS 5 coupe sprints from 0 to 100 kmh in just 3.9 seconds. It boasts a top speed of 174 mph. Perhaps most impressive of all is that all of this speed and power nets 27 mpg combined, according to Audi. 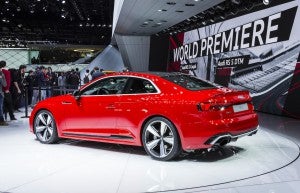 All of that speed and power flows through a sportily tuned eight-speed tiptronic to the quattro permanent all-wheel drive. It utilizes an asymmetric 40:60 distribution of the drive force to both axles.

The RS exterior design drew from its racing heritage. In this case, designers were inspired by the distinctive racing details of the Audi 90 quattro IMSA GTO, the maker notes. In the front, the car’s character is shaped by the wide, flat Singleframe and massive air inlets.

Quattro blisters on the flanks emphasize the pronounced bulges over the wheel arches, which have been widened by 15 millimeters (0.6 in). The RS-specific diffuser insert, the RS exhaust system’s oval tailpipes and a fixed spoiler lip complete the dynamic look.

Once inside the new coupe, the sporty character of the high-performance beast is highlighted by RS sport seats, the flat-bottomed RS sport leather steering wheel, a special RS display in the Audi virtual cockpit and RS logos. Further top technologies, including the head-up display, Matrix LED headlights and many driver assistance systems ensure greater safety, comfort and efficiency.

Of course, it’s fast, but it’s still an Audi, which means a comprehensive range of infotainment choices is available. The optional MMI navigation plus with MMI touch includes the hardware module Audi connect, which connects the new RS 5 Coupé to the internet using a 4G LTE signal.

Thanks to the Audi connect SIM, which is permanently installed in the car, the flat rate data package for the connect services including Europe-wide roaming is free of charge for three years. Passengers can go online with their mobile devices via the Wi-Fi hotspot option.

The touchpad in the center console is used to zoom, scroll and enter characters. Further high-end technologies, such as the head-up display and as many as 30 driver assistance systems enhance safety, comfort and efficiency. The intelligent interplay between these systems represents another step on the road to piloted driving.

The RS 5 Coupe has a following with more 13,000 units of the first-generation model have been sold since 2010. The new high-performance coupé is coming to dealerships in Germany and other European countries in June 2017. No word on the U.S. debut.