34 models and a VR look at others to come. 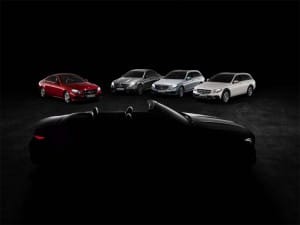 For those who want to look a few years into the future, Mercedes-Benz plans to turn to virtual reality at the upcoming Geneva Motor Show. The German automaker says it will use a customized VR system to let media and other show-goers see what it’s planning for the new Mercedes-EQ battery-electric sub-brand.

But there’ll be plenty of sheet metal on the Swiss show stand, as well. In fact, Mercedes will have a tough time squeezing everything into its short news conference in Geneva, as it rolls out an assortment of 34 different concept and production models, ranging from the Concept X-Class to the limited-edition Maybach G650 Landaulet utility vehicle.

For the moment, Mercedes isn’t saying much about the new E-Class Cabriolet, though it is expected to bear a strong resemblance to the other models in its family, most closely resembling the E-Class Coupe line that debuted at the North American International Auto Show little more than a month ago.

Expect to see an updated version of the current soft-top design, one likely to be able to open or close in less than 20 seconds, and to operate at vehicle speeds of as much as 30 mph or more, according to some hints Mercedes insiders are dropping. 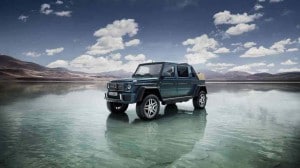 The new 2018 Mercedes-Maybach G650 Landaulet: the latest in luxury off-roading.

Beyond that, the cabrio will offer the same broad powertrain range as the E-Coupe, including gas and diesel options and, eventually, an AMG performance package.

The new drop-top will have plenty of sex appeal, but it will vie for attention on the stand with an assortment of other vehicles, notably the four new AMG models making their world premieres. These include the E63S wagon, S63 Cabriolet Ocean Blue Edition, the AMG Performance Studio C43 Coupe, and the GT C Roadster Edition 50.

The latter model gives a good hint as to why Mercedes is rolling out so many AMG models all in one place: this marks the 50th anniversary of the performance brand which started out as a small garage project run by several former Mercedes employees. Today, AMG is a well-funded division owned by parent Daimler AG, of course, and it has been launching a rapidly increasing line-up of models. 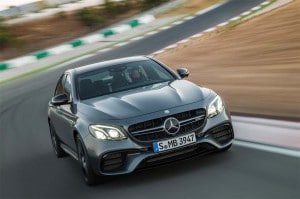 Demand for the new Mercedes-Benz E-Class has helped the German maker capture the global sales lead.

Daimler has been adding a string of sub-brands lately, starting with the renamed Mercedes-AMG. It brought back its ultra-luxury brand several years ago as Mercedes-Maybach, and we’ll see the new G650 Landaulet on display in Geneva. With only 100 set to be built – none coming to the U.S. – this extreme version of the classic G-Wagen will go up against the likes of the new Bentley Bentayga.

Another new sub-brand in the works is set to be called Mercedes-EQ. We saw a concept sedan debut at the Paris Motor Show last autumn, but for those looking to know more about what’s coming before decade’s end, visitors to the Geneva Motor Show will have to done VR glasses, according to Mercedes, as it provide “an immersive experience of electrified and networked mobility.”

The German marque also plans to give us a look at another future product, but we’ll have something tangible to look at in the form of the Concept X-Class. It’s the prototype of a new, midsize luxury pickup Mercedes will launch later this year, the production model borrowing its underlying platform from Daimler alliance partner Nissan.

That may seem a logical move considering there are more pickup trucks sold in the U.S. luxury segment than actual luxury cars, as TheDetroitBureau.com reported this week. But, for now, the X-Class is another new Mercedes model not slated to come to the States.