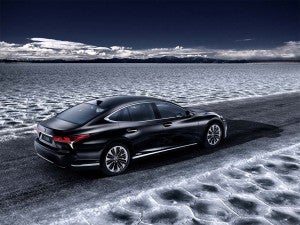 The new 2018 Lexus LS 500h will make its debut at the Geneva Motor Show next month.

We got our first look at the next-generation Lexus LS during the North American International Auto Show in Detroit. Now, the automaker says it will roll out the hybrid version of its flagship sedan during the upcoming Geneva Motor Show.

Like the gasoline-powered version, the 2018 Lexus LS 500h will adopt a new and much more aggressive body language. But the Japanese luxury brand is keeping mum about what it has in store under that more shapely hood, offering only this one teaser image.

That said, some details about the new hybrid have begun leaking out. And expectations are that Lexus will try to boost the performance quotient with the new 500h, in keeping with broader market trends, rather than focusing solely on fuel efficiency.

The new 500h is expected to adopt an all-new drivetrain, as did the conventional gas-powered model. The LS 600 gets a new twin-turbo 3.5-liter V-6. Mated to a segment-first 10-speed automatic transmission — making 415 horsepower and 442 pound-feet of torque. That’s enough to launch the big sedan from 0 to 60 in just 4.5 seconds.

The prior-generation LS 600h was notable for being the first hybrid to pair a motor assist system to a V-8. The new Lexus LS 500h is expected to go with a V-6, however, apparently sharing its drivetrain with the new LC 500h coupe. That’s a version of the 3.5-liter engine, but it only makes 354 horsepower, compared to the old hybrid’s 438 hp. Nonetheless, due to the solid, off-the-line torque of the twin electric motors, it is expected to be able to launch the LS hybrid from 0 to 60 in less than five seconds. 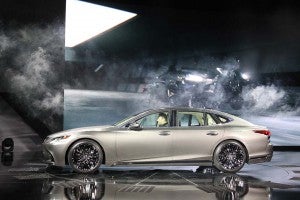 The new LS come equipped with a twin-turbo V6 that pushes it from zero to 6o mph in less than 5 seconds..

The two sources of power will be matched by two different transmissions, incidentally, a four-speed automatic and a CVT. As with the LC 500h, the Multi Stage Hybrid System primarily relies on the continuously variable transmission, but the automatic helps improve performance.

Based on what we know about the coupe hybrid, the LS 500h should get a modest bit of all-electric range, with speeds of up to 87 mph before the gas engine kicks in.

Beyond the driveline, expect to see the new 500h serve as the high-line version of the LS line, much as the old hybrid did. That means a pretty much all-out assortment of features, as well as some unique details, such as the car’s instrumentation.

Lexus hopes to get it right with the new LS, a vehicle that brand boss noted, “launched a company,” when the original sedan made its debut in 1989. But the LS has been little more than an also-ran in recent years, sales lagging well behind its key European competitors, notably the latest-generation Mercedes-Benz S-Class.

The new LS picks up on the mandate laid down by parent Toyota Motor Corp. CEO Akio Toyoda who, in a visit to Cobo Center last January declared Lexus would put more “passion” into both its design and driving dynamics.

The 2018 Lexus LS certainly lives up to that promise from a visual standpoint. It abandons the traditionally boxy Lexus look for a more coupe-like design. It picks up on the brand’s familiar “spindle grille,” but here it gets a jewel-like appearance by crafting a full 5,00 surfaces into its spokes, noted Bracken. 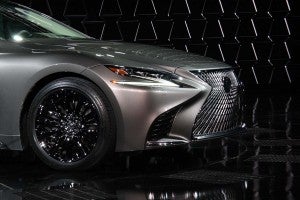 Lexus designers were instructed to liven up the design of the LS and the new-look flagship shows they did.

The cabin, meanwhile, adopts an array of premium and high-tech features. There’s a new infotainment system with expanded levels of connectivity, and the world’s largest, 24-inch head-up display to help drivers keep their eyes on the road.

Though it retains the classic leather and wood cues of a luxury car, the interior adopts a more chic and elegant appearance than the outgoing LS. One of the more intriguing design details is the integration of door armrests that appear to be floating on their own.

Comfort is, of course, a watchword for halo luxury cars, and the new 2018 LS shouldn’t disappoint. For the driver, there’s a 28-way heated and cooled seat with optional Shiatsu massage. The rear seats recline and can also be equipped with optional heating and massage functionality.