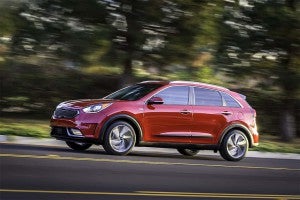 A handful of carmakers have made half-hearted stabs at challenging Toyota’s leadership in the hybrid segment, but that appears to be changing with the arrival of the 2017 Kia Niro.

Kia, the ambitious South Korean carmaker, is intent on mounting a challenge to the iconic Toyota Prius on its home turf with a new a compact utility vehicle that offers a smooth-running hybrid system as well as appealing exterior styling and an interior calibrated to offer a generous amount of space for the driver, passengers and any of their assorted stuff.

Under the tutelage of Peter Schreyer, the prolific head of advanced design for both Kia and Hyundai, its South Korean partner/rival, Kia has succeeded in bringing a succession of vehicles with distinctive styling and the new Niro fits in with the company’s growing reputation for well-designed vehicles.

The front of the Niro carries the Tigerish grille popularized the Kia Soul and the silhouette is sleek with clean, distinct lines that run cleanly from the front to the rear lift gate.

In addition, Kia designers, while mindful of need to reduce the air flow around the car, have also fashioned design elements such as front and rear lights, the corners where the windshield meets the sheet metal, wheels and door sills so the car looks properly dressed for an evening out or a big job interview.

The emphasis on design has carried over into the interior of the Niro too, where Kia’s stylists have adopted an uncluttered, functional appearance. The controls on the center console have been simplified and include knobs. 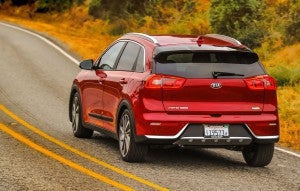 The new Niro Touring Hybrid offers sure footing on the road and off while providing plenty of safety technologies.

The version of the Niro that I drove, the top of the line “Touring” model with a price tag of $29,650 plus an additional $895 transportation charge, featured a leather-wrapped steering wheel, soft touch points throughout the cabin and comfortable seats, which are invaluable for a long trip in a small vehicle.

Kia uses aluminum and lightweight steel to hold down the vehicle’s curb weight and the combination of the extra weight from the lithium-ion battery pack and the lighter weight upper body gives the Niro a relatively low center of gravity, which Kia’s engineers put to good used to bolster the vehicle’s ride quality.

Consequently, it has a well planted feeling out on the road. I found it moved through the backroads in the Texas hill country between San Antonio and Austin quite nicely.

Kia has been criticized in the past for soft suspensions. But the Niro’s ride quality was firm, surprisingly so, with the low rolling resistance Michelin tires that Kia has used on the Touring model. But overall the multi-link rear suspension performed well on even or uneven pavement with a lot of dips — of which there were plenty.

(Click Here for details about Kia bringing the new Picanto to the Geneva Motor Show.) 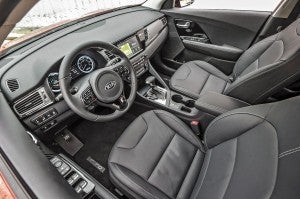 The interior of the Niro offers the right mix of new world whiz-bang and old fashioned knobs.

But the lateral grip through tight curves is very flat and impressive. On the downside, the Niro is not equipped with all-wheel-drive feature and Kia apparently doesn’t plan to offer one.

The electric power steering offered, while it offered ample feedback, also seemed rather stiff at times perhaps because we used the sport time during most of the time we spent on the sport mode. But the braking system on the Niro was very solid as regenerative braking, a standard feature on hybrids, seemed to add some extra stopping power.

By and large, the hybrid system itself with its combination of power from gasoline and electric motors was quite smooth. The shifts in the six-speed transmission were quick and seemingly effortless and the Niro never seemed to miss a beat as it moved from climbing a small hill to rounding a sharp curve. The powertrain is built around a 1.6-liter, four-cylinder gasoline more and 43 horsepower electric motor that combined to produce 139 horsepower and 195 foot-pounds of torque.

However, after driving it awhile, I felt the Niro could use a little more power to improve acceleration — it lacked punch, particularly traveling on the freeway. It was fine in city driving where the hybrid system’s extra torque comes into play, but needed more spirit in passing maneuvers out on the open road.

The Niro’s fuel economy is also impressive. The entry level model, which costs $22,890 before the destination charge is tacked on gets 50 miles per gallon in combined city and highway driving and the LX and EX models get 49 mpg, according to the information supplied by Kia. The Touring model of the Niro is rated at 43 mpg because of the draw from the car’s electric system by features such as the 10-way power seat.

Over the years other manufacturers have left the hybrid segment to Toyota because they decided building their own competitive hybrid powertrain wasn’t worth the expense.

(To see how Kia is putting a little zip into the new Soul, Click Here.)

But since the recession Kia has challenged the conventional wisdom time and again and the 2018 Kia Niro is positioned nicely to give the Toyota Prius, which made its debut before the turn of the millennium and has become something of a 21st Century icon, a run for its money with its combination of up to date styling and engineering.