Big Money Earners Drive Big Money Vehicles: Like the Rest of Us 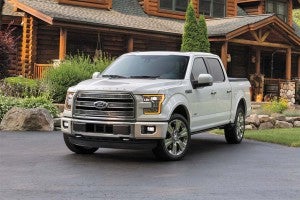 The “1%” has been the topic of many discussion during the past several months: who they are, what they do, etc. However, if you’re making more than $200,000 a year, you’ve got plenty of options when it comes to what’s in the garage.

Nearly any luxury vehicle would be in your range, and even some supercars … albeit used supercars. So what do people in that economic “class drive” more than any other vehicle? The Ford F-150, according to a new study.

MaritzCX conducted the study covering the 2016 model year and discovered the F-150, which is already the most popular vehicle in the U.S., was also tops among those earning more than $200,000 a year.

In fact, people earning that much money drive what most everyone else – the median income in the U.S. last year was about $48,000 – drives: Fords, Jeeps and Hondas. They just drive the more expensive models.

After the F-150 was the Jeep Grand Cherokee, Honda Pilot, Jeep Wrangler and the only compact car in the top five, the Honda Civic. The current top five reflects a shift away from luxury marques and – no surprise here – SUVs, crossovers and trucks.

So who is buying luxury vehicles nowadays?

You’ve got to start finding bigger paydays to find those buyers: $400,000 or more.

Shawn St. Clair, senior director of global syndication for MaritzCX, believes the shift away from luxury vehicles to more mainstream models at the $200K mark is the result of three things: he thinks the shift is due to three factors.

“Some people, like the actively employed wealthy, are too busy working to think about luxury cars,” Robert Ross, auto editor for Robb Report, a magazine for the ultra-wealthy, told USA Today. “For them, a car becomes an appliance.”

However, no area crosses over the “expensive” line like new trucks. A fully loaded F-350 can exceed $70,000 and a well-equipped F-150 carries a price tag above $35,000. In an era where buyers are demanding more flexibility from their vehicles, often trucks and SUVs can haul a trailer, a boat or simply the kids back and forth to soccer practice all while offering the comforts – and increasing the fuel efficiency – of a car.

The aforementioned F-150 can be tricked out to cost $59,795, which certainly puts buyers into luxury sedan and even small SUV territory. In fact, about a third of the F-150s sell for more than $40,000, Ford’s sales analyst, Erich Merkle told USA Today.