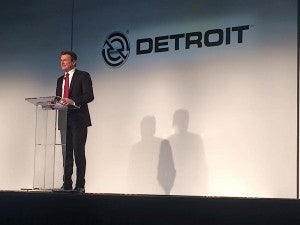 Daimler's Wolfgang Bernhard discusses the $475 million the company invested in its Detroit Diesel plant on the outskirts of the city. Bernhard resigned today.

Wolfgang Bernhard, once one of the auto industry’s rising stars, has resigned from his job as head of the Mercedes-Benz Vans and Daimler Truck & Buses.

Bernhard left the company at his own request and for personal reasons, Daimler AG said in a statement. Bernhard’s contract expires next year in February, but his resignation is effective immediately, the Daimler statement said.

“We regret this resolution, but we have a number of outstanding managers to succeed. We thank Wolfgang Bernhard for his committed work and respect his personal decision,” stated Manfred Bischoff, chairman of Daimler’s Supervisory Committee.

“Wolfgang Bernhard will be released from his duties with immediate effect. Dieter Zetsche will head Daimler Trucks & Buses until a successor will be appointed.”

Bernhard became head of the Mercedes Benz Van Division in 2009 and has been a member of Daimler AG’s board of management since 2010. Prior to being put in charge of the truck group in 2013, Bernhard was in charge of production and procurement for the Mercedes-Benz Car Group.

Bernhard also held executive positions with the Volkswagen Group and in 2007, at the time of the unwinding of the ill-fated Daimler-Chrysler merger, he was thought to have been in line to take over as CEO of the new Chrysler Group. The job, however, ultimately went to former Home Depot CEO Robert Nardelli.

(Click Here to learn why Mercedes has taken the global luxury sales lead.)

Earlier in his career at Daimler-Benz, Bernhard had caught the eye of CEO Juergen Schrempp, who first put him in charge of the AMG division and then sent him to the U.S. to serve as Dieter Zetsche’s chief lieutenant during one of the several turnarounds that have part of Chrysler’s long and checkered history.

The turnaround was successful and Bernhard emerged as a leading candidate for senior executive positions throughout the industry before taking the post at VW, but he ultimately returned to Daimler to serve as one of Zetsche’s top lieutenants.

(To see more about Daimler’s push into ride- and car-sharing, Click Here.)

However, more recently Zetsche has also made an effort to promote younger executives and executives with experience in the Far East, particularly China, which has emerged during the last decade as one of the company’s top global markets.