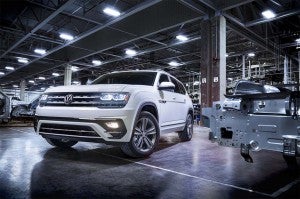 For millions of Americans, SUVs and crossover-utility vehicles have become the hip alternatives to the classic minivan. But maybe not hip enough, when seven-seaters like the new Volkswagen Atlas are largely used to shuttle kids to school and soccer practice.

So, automakers have been looking for ways to spice things up a bit, and VW is joining that fray by adding a new R-Line package for the big Atlas that will soon start to roll out of the maker’s U.S. plant in Chattanooga, Tennessee.

However, what the maker refers to as “performance-inspired” upgrades are really more show than go, the VW Atlas R-Line sharing the same two engine options and eight-speed gearbox, as well as suspension and other settings found on the base version of the new utility vehicle.

In Greek mythology, Atlas carried the world on his back and, in many ways, that’s what VW’s new SUV will have to do. Where passenger car models like the Passat, Golf and Jetta once propped up the Volkswagen brand, the maker has lately found itself struggling as more and more American motorists have begun shifting to SUVs, CUVs and other light trucks.

(Volkswagen starting up Atlas production. Click Here for the story.) 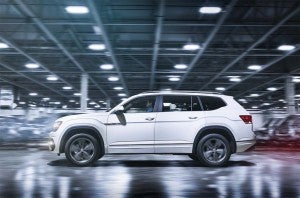 The new seven-passenger Atlas gets a new performance styling package, the R-Line, offering for buyers looking for a little more zip.

Atlas made its media debut in early November, followed a few weeks later with a public roll out at the Los Angeles Auto Show. It’s aimed at one of the bigger niches in the U.S. market and aimed to fill a yawning gap in the Volkswagen America line-up. Until now, the maker had only two utes to compete with, the little Tiguan and big Touareg.

Its launch “is the beginning of a new future for Volkswagen in America,” said Hinrich Woebcken, the head of VW’s North American operations, at the Atlas debut.

The debut of the R-Line option – which is also offered on a variety of other VWoA products, suggests the Germans don’t want to miss any opportunities.

(Click Here for an update on VW’s diesel buyback settlement.) 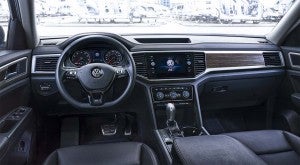 The R-Line package also includes interior updates, like a new steering wheel, for the Atlas.

There are also numerous R-Line logos inside and out – the logo even showing up on the infotainment screen when you start up the Atlas. Other interior details include stainless steel pedal covers and a revised steering wheel.

The seats remain stock Atlas, however, as do the powertrain options. That includes the 235-horsepower four-cylinder engine, or a 276-horsepower V-6. Both variants are paired with an eight-speed automatic transmission, though all-wheel-drive is optional with the 3.6-liter six.

VW says the Atlas will go on sale in the U.S. this coming spring. The R-Line will follow “later in the year.” The carmaker has not announced specific timing of exports to overseas markets, but Woebcken hinted that will likely take another year.