Plug-in hybrid will be first in Subaru line-up. 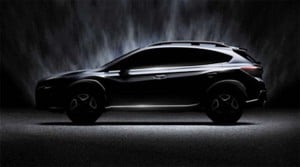 The 2018 Subaru Crosstrek will make its U.S. debut at the New York Auto Show in April.

Arguably no automaker has a longer, deeper history in the crossover segment than Subaru, the Japanese maker that helped change the game with the launch of its original Outback model in 1994.

How things have changed – and how they’re about to change even more, if this teaser image is any indication. It landed in our e-mail inbox along with confirmation that the next-generation Subaru Crosstrek will make its debut at the 2017 General Motor Show just a little more than a month from now.

Officials details are limited, Subaru confirming only that the next Crosstrek – also known as XV outside the U.S., will be introduced on March 7 by Yasuyuki Yoshinaga, the president and CEO of Subaru’s parent Fuji Heavy Industries.

That will mark a relatively quick complete makeover considering the Subaru XV concept the current Crosstrek is based on only made its appearance in concept form in 2011, reaching showrooms in many markets as a 2012 model. In the U.S., the debut of the production model came at the April 2012 New York Auto Show, reaching showrooms badged 2013. 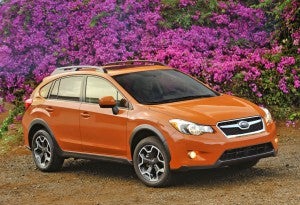 The crossover was originally known as the XV Crosstrek but has since shortened its name.

The original Crosstrek shared its platform and other key mechanical features with the Subaru Impreza. And like the latest Imprezza, the next-generation crossover will share a new modular platform that will have the capability of handling both conventional gasoline and battery-based drivelines. A plug-in hybrid is expected to be part of the new model’s options, though not necessarily at launch.

A conventional hybrid was offered early on, but was dropped for the 2017 model-year due to sluggish sales.

The basic engine is expected to be a direct-injection, 2.0-liter four-cylinder package making around 152 horsepower and 145 pound-feet of torque. Subaru’s familiar symmetrical all-wheel-drive system should be standard. A Lineartronic CVT gearbox will be standard issue, but some trim levels are likely to be offered with an optional six-speed manual.

The original Crosstrek concept introduced an array of digital technologies, and the new production model will take things further with the newest versions of the Starlink infotainment and EyeSight advanced driver assistance systems. That is expected to include active cruise control, pre-collision warning and lane departure warning. 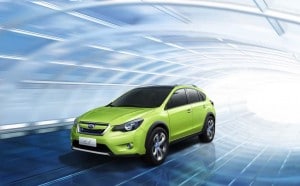 Visually, the teaser image hints at a more rugged appearance for the 2018 Subaru Crosstrek, including new bumpers and modified wheel arches. It will boast a taller ride height than the standard Impreza, and get standard-issue roof rails.

Subaru has good reason to update the Crosstrek so quickly. Sales in the compact crossover segment have been soaring. And the Impreza-based model finished 2016 up 7.6% — making it third in the Subaru portfolio, its sales of 95,677 behind only the Outback and Forester.

American buyers won’t have to wait as long for the next-gen Subaru Crosstrek as they did the first time around. We expect to see the new model appear – again – at the NY Auto Show this April, with U.S. sales likely to begin by autumn as a 2018 model.