Also expect to hear about additional battery-cars during CES keynote. 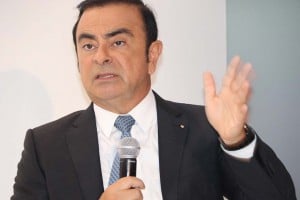 Carlos Ghosn, the CEO of both Nissan and its French alliance partner Renault, is expected to make some big news about battery-electric vehicles and autonomous vehicles during a keynote speech at this week CES conference in Las Vegas.

Among other things, Ghosn will likely reveal plans for the next-generation Nissan Leaf, the new model expected to deliver as much as twice the mileage of the original battery-electric vehicles. Ghosn may also announce timing for the production of the Japanese maker’s first self-driving vehicle.

Nissan officials declined to comment on what Ghosn has in store, though they did point out that the company was the first manufacturer to launch mainstream production of a battery-electric vehicle. And it has been an early proponent of autonomous vehicle technology.

While Tesla now is selling more battery-electric vehicles each month than Nissan, the Japanese carmaker has the distinction of having more BEVs on the road than any other company. Since the 2010 Nissan Leaf debuted, buyers around the world have snapped up 250,000 of the vehicles. 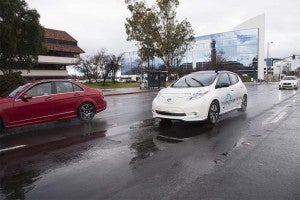 An autonomous Nissan Leaf is expected to be a part of the news that Ghosn breaks this week.

By comparison, Tesla was expected to wrap up 2016 with sales of around 29,400 Model S sedans and 18,000 Model X battery-SUVs, according to tracking site InsideEVs.com.

The fact that the Leaf has gone this long without any major change is one problem, according to industry analysts, but another factor is range. Nissan recently upped the size of the car’s battery pack by 27%, range jumping to 107 miles per charge. But that is half of what Tesla is promising for the Model 3 coming later this year, and Chevrolet’s new Bolt EV has an EPA-rated range of 238 miles, and a price tag of just under $30,000 factoring in the $7,500 federal tax credit.

While Leaf could use a new design and updated infotainment and safety, technology, analysts believe that getting range up is the single most important step the maker must take with the Gen-2 model.

Various sources contacted by TheDetroitBureau.com hint that a big bump will come with the new model CEO Ghosn will discuss during his speech at what long was known as the Consumer Electronics Show. In an interview a year ago, Nissan’s global design director Shiro Nakamura told this publication that something on the order of 200 miles was Nissan’s target for the new Leaf, which could be on the road within a year.

The good news for Nissan is that battery prices are tumbling. When the Leaf project was first conceived, a kilowatt-hour of lithium-ion batteries cost around $1,000. That was down to $400 by the middle of the car’s lifecycle. And, if Nissan can get the same sort of deal General Motors is getting for Bolt, it would now pay around $150 a kWh.

To put the savings into perspective, the 30 kWh battery in the latest Leaf would have cost the company around $30,000 at the beginning of the decade. Now, it would come in around $4,500. Doubling its size to 60 kWh, which would boost range to just over 200 miles, would still mean a price to the factory of under $10,000, a third of what the short-range battery cost at one point.

Another announcement expected from Ghosn will outline plans to add still more electric models to the Nissan line-up. While the brand was an early leader in the field, it has stuck with just one plug-based model, even as key competitors like General Motors, Ford and Volkswagen, have begun ramping up their electrified line-ups. Ford this week revealed plans for a hybrid Mustang, a 300-mile EV and more. VW plans to have 30 plug models on sale by 2025.

The third topic Ghosn is expected to address will touch on plans to put Nissan’s first autonomous vehicle into production. Again, the maker was an early pioneer, but competitors are stealing a march. Tesla is rapidly upgrading its Autopilot system and other makers have set out hard timelines to be in production by, possibly even before, 2020.

So far, Nissan has only said it wants to have its first production autonomous vehicle rolling down an assembly line that year. Ghosn will likely reveal more specific details about what Nissan models would go hands-free and when.