Opposed-piston engine could get there without breaking the bank. 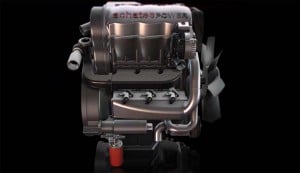 With the Environmental Protection Agency upholding the tough, 2025 Corporate Average Fuel Economy standards, automakers are going to face a tough challenge. Barring a reversal by the incoming Trump Administration, they’ll have to deliver an average 54.5 miles per gallon by 2025.

The general consensus is that this will mean widespread use of electrifications – from conventional hybrids to pure battery-electric vehicles. But a small research and engineering firm, based in San Diego, thinks it has a viable – and far more cost-effective — solution that could deliver nearly twice the mileage of conventional gas engines – as much as 37 mpg for even full-size pickup trucks.

The Achates opposed-piston engine “will be 50% more efficient than the leading gas turbocharged direct-injection engine on the market today,” said Dave Johnson, a former Ford Motor Co. engineer who now serves as CEO of Achates Power.

At first glance, an Achates engine looks a lot like a conventional gas or diesel engine, and that’s entirely intentional. The goal, explained Johnson during a small media roundtable in Detroit, is to make the opposed-piston engine, or OPE, “plug-and-play.” In other words, company officials claim that their design could readily be produced in existing engine plants and then slipped into existing vehicles with only the slightest of modifications. 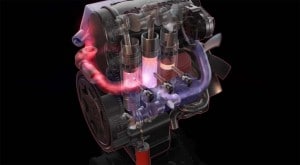 This cutaway shows how the two pistons move towards each other in the cylinders.

As the name implies, an opposed-piston engine has two pistons per cylinder. As the engine runs, they move towards each other inside the cylinder, almost like boxers aiming fists at one another. The design requires two crankshafts but eliminates the costly cylinder head and a number of other engine components. That means the cost of the engine should be about the same – and possibly even cheaper – than current gasoline engines.

The OPE is a two-stroke, compared to the four-stroke cycle that now dominates internal combustion design. Unlike the two-strokes found in power tools and in a handful of older vehicles, however, Achates claims its engine produces significantly less emissions than today’s gas or diesel powertrains – and doesn’t burn oil the way old two-strokes did.

Like a diesel, an Achates design uses compression ignition. In other words, the gas/air mixture self-ignites, rather than relying on a spark plug. But the OPE can readily be tuned to use gasoline or diesel, as well as a range of other fuels, including hydrogen, LPG or compressed natural gas.

Equally promising, Achates research suggests the technology could be used in engines as small as 500 cc, or as big as what you might find in a semi-truck. In fact, less advanced opposed-piston engine designs have been around for decades, used in applications such as aircraft and, quite commonly, tugboats. The first design for an opposed-piston engine actually dates back to 1882 and was conceived by James Atkinson, the same engineer whose Atkinson Cycle is now used by many hybrid gas engines.

The Achates design is meant to improve performance, efficiency and emissions, Johnson explained, noting that the company now has a dozen different development programs underway, funded by nine automakers. He would not reveal specific clients but hinted that both automotive and truck clients are in the mix. Several industry insiders contacted by TheDetroitBureau.com said they were aware of, and intrigued by, Achates research, though there remains plenty of skepticism. 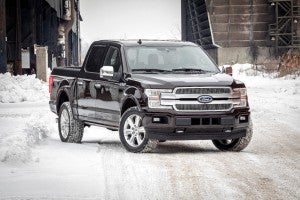 Achates believes it could deliver 37 mpg in a truck as big as the Ford F-150.

For his part, however, Achates CEO Johnson is entirely upbeat. After years of development, he insists that the OPE will soon be ready to move from the research lab to the street, and that in the near future, “Any vehicle that has an internal combustion engine today will use this engine.”

Whether that optimism will prove out remains to be seen. Achates expects to have a demonstrator vehicle on the road by next year. It will use a 2.7-liter version of the engine making 270 horsepower and 479 pound-feet of torque.  Achates also expects to reach 37 mpg.

Those are good numbers for a full-size pickup, the type of vehicle Achates seems most interested in targeting initially. And for good reason considering that a vehicle like the Ford F-150 or Chevrolet Silverado will need to deliver 33 mpg to meet the future CAFÉ target. So far, the best any maker has achieved is 21 city, 29 highway and 24 combined with the Ram 1500 EcoDiesel — though the EPA’s new claim that Fiat Chrysler Automobiles cheated on emissions raises doubts about those figures.

Who will be first to put Achates’ engine into production? Johnson and his development team won’t say, but they insist that this time, a breakthrough engine finally will be a breakout that could breathe new life into internal combustion technology, making it possible to meet the new mileage standards while keeping vehicles within reach of the typical consumer.