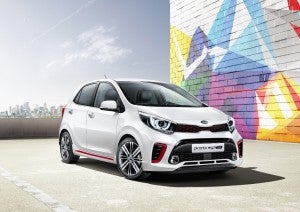 Kia's new replacement for the Rio, the Picanto, will make its debut at the Geneva Motor Show in March.

After an early tease of the Picanto – the replacement for the Rio – Kia decided to provide a little more insight about the new hatchback and where it can be seen this car show season — as well as new pictures.

Kia is unveiling its new Stinger sports car in Detroit and plans to follow that up with the Picano debut at the Geneva Motor Show. The released pics show the Picanto in GT-styling.

Created by Kia’s design centers in Namyang, Korea, and Frankfurt, Germany, the new Picanto brings youthful and energetic character to the A-segment, claims the automaker. However, city cars are hanging in there despite low gas prices.

The “hot hatch” segment is getting a lot of love these days. In fact, Ford recently released its new Fiesta, which comes in an ST model for those looking up to tear up the road.

(Kia ready to spice up hot hatch market with new Picanto. Click Here for the story.)

While it’s unclear if the Picanto, which will replace the Rio, will be available with a powerplant that will make it a “hot hatch,” Kia claims it “combines a youthful and energetic new exterior and interior design with greater potential for customer personalization, inside and out. 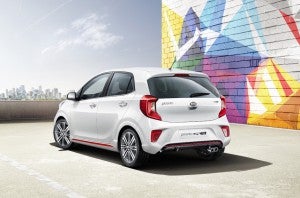 In short, we don’t know about the “go,” but the renderings released by the maker reveal plenty of “show,” including an aggressive exterior look that may translate to the car’s handling abilities.

(Kia set to sting with GT-inspired sports car. To get a look, Click Here.)

The new model – revealed in Kia’s sports-inspired ‘GT-Line’ specification – conveys a more assertive stance through bolder body lines and subtly sculpted surfaces. A 15 mm-longer wheelbase (2,385 mm to 2,400 mm) also pushes the wheels further out into each corner for a more confident appearance

However, the smaller cars are also coming laden with a variety of options that automakers used to believe that the first-time car buyers that are typical for this segment weren’t interested in. 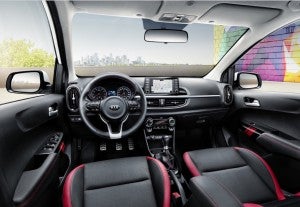 At the heart of the Picante's cabin is a new ‘floating’ touchscreen infotainment system.

At the heart of the cabin is a new ‘floating’ touchscreen infotainment system, making the latest in-car technology available to occupants. The Picanto offers greater potential for customer personalisation, with buyers able to choose from a range of colours for trim and upholstery.

However, Ford’s new Fiesta got a new equipment level for 2017 that includes a panoramic glass roof and a gaggle of safety technology.

It would appear the new Picanto will also feature a suite of high-tech comfort, convenience and safety features. Kia claims that “is underscored by a modern and refined new cabin design, with smarter packaging efficiency than ever before.”