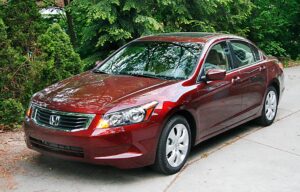 The 2012 Honda Accord is just one of 1.29 million vehicles the automaker is recalling due to Takata airbags.

As usual, the repairs will be made at no cost to the owner. Additionally, no new driver front airbag inflators in Honda or Acura automobiles will be subject to recall in this action, as all potentially affected driver inflators are already subject to prior recalls.

However, some vehicles previously repaired under earlier driver front inflator recalls will now require replacement of those vehicles’ passenger front inflators under this new action. Notices for this action will be mailed out in late February.

Takata’s recalled airbag inflators can, in certain situations, become unstable and inflate with too much force and explode causing plastic and metal shrapnel to fly into the vehicle, injuring or even killing the vehicle’s occupants.

In fact, more than a dozen deaths have been attributed to the problem and hundreds of injuries around the globe. It has become the largest recall effort in automotive history impacting at more than a dozen automakers worldwide.

Here are the Honda and Acura vehicles that are part of the recall:

Honda is announcing this recall to encourage each owner of an affected vehicle to take it to an authorized dealer for repair as soon as they receive notification of this recall from Honda.

With this new action, a total of approximately 11.4 million Honda and Acura automobiles have been or now are subject to recall for replacement of a Takata driver and/or passenger front airbag inflator in the United States.