300-mile EV and autonomous hybrid also in the works. 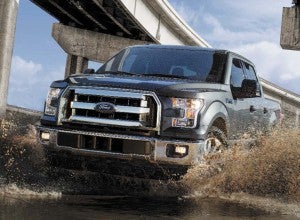 Ford is betting there's a market for even more fuel-efficient, hybrid-based pickups.

Ford is getting charged up about electric propulsion. Confirming what TheDetroitBureau.com first reported two years ago, the Detroit automaker will launch a hybrid version of its classic pony car, the Mustang.

Ford will also debut a hybrid version of its big F-150 pickup, introduce a pure battery-electric SUV with a range of at least 300 miles by 2020, and it plans to add a hybrid with autonomous driving capabilities, the maker said. The latter two models will go into production at the same, Flat Rock, Michigan assembly plant producing the Mustang.

A $700 million investment at that facility, will make it “capable of producing high-tech electrified and autonomous vehicles,” CEO Mark Fields said during a news conference at the plant.

(Faraday wants to redefine the Future with its FF91. Click Here for a look at the electric supercar.)

In all, Ford has said it will produce 13 electrified models by 2020, and it has now released details on more than half of them – the list now also including a plug-in hybrid version of the Transit Connect van. It will be dubbed the Transit Custom and sold in Europe. 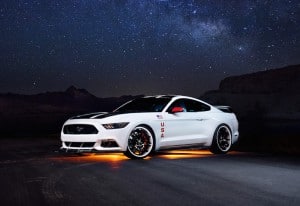 Ford hopes to boost demand for the Mustang by adding a hybrid version.

There will even be hybrid versions of two Ford police vehicles.

Ford currently offers a handful of conventional hybrids and a few plug-ins and pure battery-electric vehicles, the latter including versions of the C-Max people-mover and the Focus sedan. But it is betting that it can rapidly expand its line-up as demand for electrified products grows.

That might seem counter-intuitive considering the way its current offerings have lagged in the market – as have most, though not all battery-based vehicles. Even the long-popular Toyota Prius has been losing momentum at a time when gasoline prices are running in the low $2 range.

But in an interview with TheDetroitBureau.com, Joe Hinrichs, Ford’s Vice President of the Americas, said the maker is confident about the future of hybrids and more advanced plug models. And for a variety of reasons, he said. Among other things, “we believe that as costs continue to come down, demand will increase.”

There’s also clear indication that consumers will warm up to battery models delivering gas-like range. Tesla, for example, has already taken an estimated 400,000 or so advance reservations for its 200-mile Model 3. Due out later this year, it will carry a price in the low-$30,000 range after factoring in the federal $7,500 tax credit. 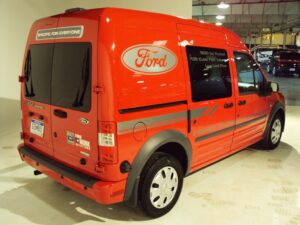 Ford will do an electrified Transit Connect, but it will be limited to the European market.

It remains to be seen exactly what sort of hybrid propulsion package Ford will use with the Mustang. It could go in either of two directions: focusing on fuel economy or boosting performance while also improving mileage over the classic approach of increasing displacement. The good news is that electric motors can deliver tremendous amounts of power. The newly unveiled Faraday Future FF91, for example, makes 1,050 horsepower and can launch from 0 to 60 in just 2.39 seconds.

As for the hybridized F-150, Ford will actually follow General Motors which introduced the first hybrid full-size truck a few years back, albeit soon pulling it from the line-up. It’s again unclear what sort of powertrain Ford will use, though it very well could see an electric motor assist added to one of the current EcoBoost gas engines now used in the F-150. Truck buyers have, of late, shown a lot of interest in downsized powertrains that don’t sacrifice performance and capacity.

Ford specifically did note that some of its future hybrid models will be turbocharged. That approach isn’t unique. Acura uses turbocharging on its hybrid MDX crossover, as well as the NSX supercar. The BMW i8 also has a turbo on its gas engine.

As to the electric SUV, that move reflects several trends. Broadly, industry data show that battery vehicles will only be seen as mainstream when they deliver car-like range, and 300 seems to be the current bogey for many of Ford’s competitors.

Equally important, the plan reflects the reality of the U.S. market and, increasingly, what is happening in most of the world’s other key markets: buyers are rapidly shifting away from conventional passenger cars to SUVs and crossovers. A plus is that utes tend to have the sort of load floors that make it easier to tuck away large battery packs without intruding into passenger and cargo space.

Among other makers entering the long-range SUV niche will be Volkswagen and its up-market Audi brand, as well as Aston Martin.

(Electric vehicles, autonomous cars and more. Click Here for a look at the 2016’s top stories.)