But it - and other Chinese makers - could hit the great wall of Trump. 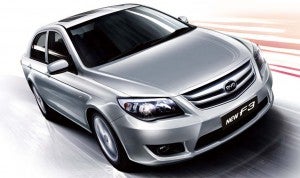 The BYD F3 could be one of the first products the Chinese maker brings to the U.S.

Even with an incoming president threatening to erect stiff trade barriers on automotive products, China’s BYD says it wants to start selling automobiles in the U.S. market within two to three years.

Though it already has an American corporate office near downtown Los Angeles, the battery-electric automaker has repeatedly delayed its entry into the U.S. But with their home market expected to continue slowing after a weak 2016, a growing number of Chinese makers are looking at the U.S. as a source of growth. Guangzhou-based GAC Motor outlined its own plans during the North American International Auto Show in Detroit last week.

Saying its product plans could be “adjusted” to American needs, Li Yunfei, deputy general manager of BYD Co Ltd., said during a Beijing event that it wants to enter the U.S. in “roughly two to three years.”

Backed by mega-investor Warren Buffett’s Berkshire Hathaway, BYD has been talking about the U.S. market since it set up its own display at the 2010 Detroit Auto Show. In 2014, it was back at Detroit’s Cobo Center, outlining plans to launch four U.S. models in the next year or so.

But, company officials have repeatedly sounded a note of caution. “BYD’s not in a rush to come to the U.S,” said Michael Austin, then president of BYD America, in a 2011 auto show interview with TheDetroitBureau.com. Before it gets here, he insists, “We want to get it right.” 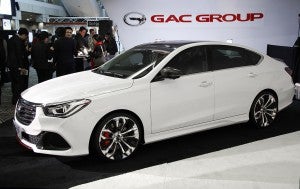 GAC announced plans to open a new research center in the U.S. by the end of the year.

One of the challenges was waiting for the right time to start selling electric vehicles into a skeptical American market. With the advent of long-range products, such as the Tesla Model S and the new Chevrolet Bolt EV, as well as a sharp decline in the price of lithium-ion batteries, the products BYD would bring to the States will likely be quite different from what it would have offered in the past.

Meanwhile, BYD is expected to break with the approach taken by other Asian automakers entering the U.S. in decades past. Japanese companies like Toyota and Nissan, and later Korean marques Hyundai and Kia, initially focused on low-end products, undercutting domestic American brands.

In a 2015 interview, BYD executive Stella Li, stressed that, “We don’t want to compete on price anymore, but on quality and innovation.”

BYD actually does have a modest presence in the U.S. already, currently focusing on electric buses and a specialized fleet vehicles. But it appears to be hoping for a much larger presence once it enters the passenger car segment.

(Click Here for more about Trump threatening to expand his tariff to Canada and Germany.)

The same is the case for GAC, also known as Guangzhou Automobile Group Co. That manufacturer has also made repeat U.S. auto show appearances, only a year ago stating a goal of importing its first Chinese-made car in 2017. In a news conference at the Detroit Auto Show, however, it said it was pushing back to 2019.

GAC revealed three new vehicles during its news conference, including a hybrid-electric concept it calls the EnSpirit, an electric vehicle named the GE3 and its exhibit centerpiece, a midsize crossover vehicle dubbed the GS7.

The Chinese maker already operates in 14 countries and hopes that as much as 10% of its total volume will go into export markets by 2020. 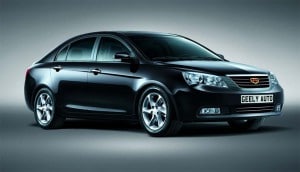 Geely is already marketing some of its own products, like this Emgrand EC7, in Europe.

But whether the U.S. will accept either BYD and GAC – or any of a number of other Chinese carmakers eyeing the market – is uncertain. Incoming President Donald Trump has made a habit of issuing twitter warnings declaring his intent to block the import of automobiles from Mexico. He has lately also taken aim at Canadian and German imports, as well. And he has, more broadly, raised questions about trade with China.

American motorists do have the opportunity to buy two Chinese-made vehicles already. They include a stretch version of the Volvo S60 sedan called the Inscription, as well as the 2017 Buick Envision SUV. Volvo’s parent, Geely, has expressed interest in introducing other Chinese-made Volvos to the company’s U.S. showrooms. And it is looking at ways to launch its own Geely line in the States, as well.