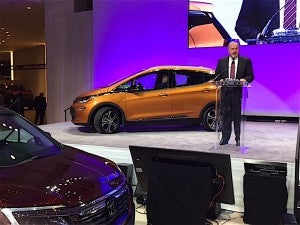 The Chevrolet Bolt EV claimed another significant honor in its bid to prove that battery-electric vehicles no longer be segregated into a largely forgotten green ghetto.

The first long-range battery-car to carry a mainstream price tag, Bolt was named North American Car of the Year during a closely watched ceremony marking the opening of the 2017 North American International Auto Show.

“The market is taking notice of this car, the first to offer a no-excuses reason to drive an electric vehicle,” said Mark Reuss, General Motors’ global product development director, as he took hold of the newly redesigned NACTOY trophy – which happened to be designed by recently retired GM styling chief Ed Welburn.

The Chevy Bolt EV has received kudos for delivering near car-like range of 238 miles per charge, as well as a price tag that dips just below $30,000 when factoring in the $7,500 federal tax credit. That has already earned the new model honors as Motor Trend Car of the Year, and Green Car of the Year. 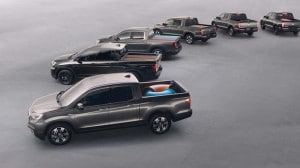 The 2017 Honda Ridgeline got a new look but retained its unibody construction and won N.A. Truck of the Year.

Reuss and other GM officials say they are hoping that delivers a message to mainstream consumers who may yet be skeptical about the advantages of battery power.

The Bolt EV’s win came as the NACTOY awards marked their 24th year. The Chevy battery-car bested two other strong contenders: the new Genesis G90 sedan and the Volvo S90 – the Swedish sedan sharing the same underpinnings as the Volvo XC90 that won the North American Truck/Utility award in 2016.

The truck and utility vehicle categories were split apart for 2017, reflecting the increasing shift from the passenger car to truck side of the market. And it resulted in another surprise win, this time the new Chrysler Pacifica taking home the Utility Vehicle of the Year honors.

The Chevrolet Bolt won the North American Car of the Year.

“Despite so many alternatives that have come to market over the past 20 years,” said Fiat Chrysler Vice President Tim Kuniskis, “there is no better alternative for a family than the minivan.”

What was then known as the Chrysler Corp. is generally credited with creating the modern minivan in 1984, and remained dominant in the segment for nearly three decades. The minivan has lost momentum in recent years, however, as buyers have opted for hipper SUVs and crossovers. Meanwhile, Chrysler saw its minivan sales crown nabbed in 2011 by rival Honda’s Odyssey model.

The Pacifica topped both the Mazda CX-9, as well as the F-Pace, the first-ever utility vehicle from the Jaguar side of Jaguar Land Rover.

(Click Here for more about GM’s launch of a public test of an autonomous Chevy Bolt EV.)

The third NACTOY trophy was another surprise, the North American Truck of the Year award going to the Honda Ridgeline. 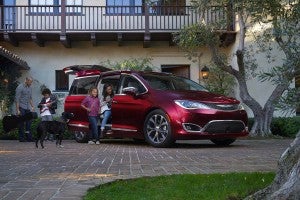 Chrysler Pacifica is the N.A. Utility of the Year.

Honda attempted to change the game nearly a decade ago when it launched the original Ridgeline, adopting a car-based platform, rather than a traditional body-on-frame design. But the midsize model failed to click with consumers and Honda pulled it from the market.

Rather than giving up, however, the Japanese manufacturer gave the Ridgeline a complete makeover for 2017. It stuck with the crossover-style platform but adopted a more truck-like exterior design while adding an assortment of new features – from a trunk-like storage bin to an advanced suite of safety features – that have resonated with consumers, as well as the 60 U.S. and Canadian journalists on the NACTOY jury.

(New trophy in store for NACTOY winners. Click Here for the story.)

“We’ve never really been known as a truck company,” said Mendel. “It’s nice to get to get this sort of recognition going up against some very tough competition.