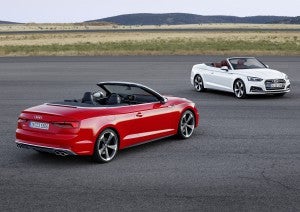 Audi's two newest cabriolets – the A5 and S5 – are hitting the streets as 2018 models and debuting at the Detroit Auto Show.

Few manufacturers have been rolling out more new products, especially on the luxury end of the spectrum, than Audi. And U.S. luxury buyers will get a good look at a pair of new convertibles from the German maker now that the 2017 North American International Auto Show is getting underway.

The all-new 2018 Audi A5 and S5 Cabriolet models complete the makeover of the brand’s mid-range coupe line-up, following the launch of the A5 and S5 two-doors last June in Germany, and the A5 Sportback at the Paris Motor Show last autumn.

Like the hardtop A5 and S5, the new convertibles are meant to be what Audi CEO Rupert Stadler dubbed “the perfect fusion of form and function,” just with a little more open-air flair.

As with the coupes, the convertibles are both lower and wider than the vehicles they replace. The hood is lower slung, and the brand’s trademark singleframe grille broadens out noticeably, anchoring twin cats-eye LED lamps.

The overall shape retains some of the basic lines and curves of the outgoing Audi A5/S5, particularly when it comes to the roof and C-pillar. But where former Audi design chief Walter da Silva personally opted for a rather slab-sided look on the old model, Andreas Mindt, the exterior designer for the new models, went with something more sculptured. 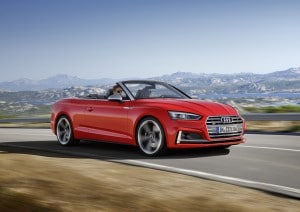 Audi's new 2018 S5 Cabriolet gives the maker another new-look model for the U.S.

There’s a rising accent line running wheel-to-wheel above the rocker panels, and an even more prominent detail is the character line that stretches from hood to trunk, flowing almost like a puff of smoke in the wind tunnel. A look at the rear’s sharp edges reveal that Audi designers put a high premium on aerodynamics.

Meanwhile, by using a more advanced mix of aluminum and high-strength steels, Audi claims it was able to make the new Cabriolet models 40% more rigid – no easy feat with a convertible – and lighter, despite being longer and wider. The 2018 A5 sheds 55 pounds compared to its predecessor, the S5 a full 99 pounds.

For convertible buyers, the numbers that might matter more cover the operation of the A5 and S5 ragtop: a one-button design that takes just 15 seconds to raise or lower, and which can be operated at speeds of up to 31 mph. The new design folds into three layers and tucks underneath, rather than atop, the luggage compartment to improve cargo capacity.

The A5 version shares the same 2.0-liter turbo engine as the Coupe and Sportback models. Paired to a seven-speed dual-clutch gearbox, it makes 252 horsepower and 273 pound-feet of torque and can blast from 0 to 60 in 6 seconds, about 0.6 seconds faster than the old A5 Cabriolet. 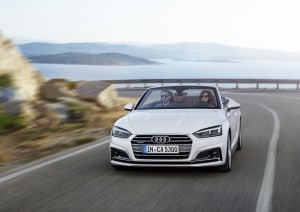 The all-new A5 Cabriolet comes to the market as a 2018 model.

Both models come standard with Audi’s Quattro all-wheel-drive, which nominally distributes 40% of the engine’s torque to the front wheels, 60% to the rear. Wheel-selective torque control, Audi’s version of torque vectoring, helps steer the car through corners.

The two new models also share an updated five-link suspension up front. And the S5 is available with dynamic steering, which uses a variable steering ratio that adjusts to both vehicle speed and driver-selectable mode settings.

For a brand already known for interior refinement, Audi has updated the cabin layout with an eye towards “driver-focused technologies.” Decorative inlay trim runs from door to door, and envelopes the new climate control system. There’s also a new Bang & Olufson 20-speaker audio package available, part of a broader update to the infotainment system. That includes revisions to the voice control technology meant to make it more accurate and efficient, the maker claims.

On the safety front, the 2015 Audi A5 and S5 Cabriolets get a suite of new advanced driver assistance system, or ADAS, technologies, including forward collision warnings. Active cruise control with the ability to come to a complete stop in traffic, is optional.

Pricing and fuel economy numbers will be available closer to the U.S. launch later this year.