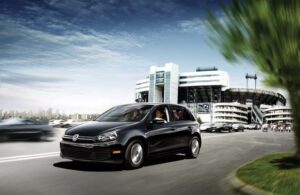 Volkswagen's plan for its 3.0-liter diesels includes buying back some 20,000 units.

Volkswagen has locked down a $2 billion deal covering 80,000 vehicles equipped with its rigged 3.0-liter turbodiesel, a federal judge in San Francisco has confirmed.

The settlement, accepted by plaintiffs representing VW, Porsche and Audi owners, will include the buyback of as many as 20,000 of those vehicles. But U.S. District Court Judge Charles Breyer issued a stern warning to those owners not to strip those cars and crossovers before attempting to qualify for the buyback.

According to a report on Jalopnik, a Cincinnati man “completely stripped” his 2010 VW Golf diesel – which was covered by an earlier settlement involving 475,000 vehicles with 2.0-liter engines. The man reportedly removed even the hood, bumpers and seats, along with “a big portion of the interior.” VW rejected his car which could have gotten as much as $15,557 under the buyback.

The two settlements were triggered by the September 2015 revelation that Volkswagen had equipped its 2.0-liter diesels with a “defeat device” designed to illegally pass emissions tests. The automaker subsequently also acknowledged it rigged its 3.0-liter engine, as well.

The deal covering the smaller turbodiesel was announced in June by the EPA, the Justice Department and other federal and state agencies. Under that $14.7 billion agreement, about $10 billion will be used to buy back the majority of the 475,000 vehicles. Additional funds will go to clean air efforts. 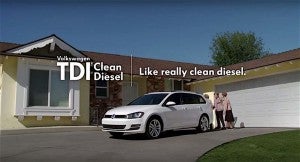 Volkswagen's "Clean Diesel" ad campaign misled the public and now the maker has finalized its latest plans to deal with the issue.

The latest agreement is expected to cost VW $1 billion, though Judge Breyer did not reveal specific details beyond noting the automaker is expected to buy back at least 20,000 of the 3.0-liter models – which were sold under the Volkswagen, Audi and Porsche badges. Ultimately, the automaker could be forced to buy all of the 80,000 vehicles back if it cannot come up with an emissions system update acceptable to both the EPA and California regulators.

During this week’s hearing on the settlement, Volkswagen attorney Robert Giuffra made an apparent reference to the Cincinnati incident, noting “one owner” had stripped “almost every part” from his vehicle before bringing it to the dealer. He added that this “goes too far.”

Judge Breyer concurred, adding that owners are required to bring back vehicles “in the condition that they were in as they were being driven on the road” to qualify for the buyback. He pointedly told owners that, “A word of caution is appropriate at the time.”

(Has VW put the nail in the coffin for U.S. diesels? Click Here.)

The settlement will provide those qualifying for the buyback a price based on what their vehicles would have been worth the day the EPA revealed the scandal 15 months ago. They also will qualify for additional financial compensation. For owners of 2.0-liter models, that ran from $5,100 to $10,000.

The 3.0-iter vehicles qualifying for buybacks were older models that, it appears, would likely be difficult to impossible to repair cost-effectively. They are 2009 to 2012 Volkswagen Touareg SUVs, as well as 2009 to 2012 Audi Q7. VW expects to eventually be able to modify the remaining 2013 through 2016 3.0-liter diesel models.

But it will have just a year to pull together a fix that the EPA and the California Air Resources Board will be willing to sign off on. Otherwise, VW will have to buy back the rest of those vehicles, as well.

Some of the costs for the repair, buyback and compensation plan will be covered by German mega-supplier Robert Bosch GmbH, which was accused of helping Volkswagen cover up its diesel emissions problems.

Separately, VW continues to negotiate a settlement with investors who say they were blindsided by the scandal and have suffered major losses in their equity holdings. The carmaker already reached a $1 billion deal with its U.S. dealers. And criminal investigations continue in both the U.S. and Germany. European Union regulators earlier this month threatened to file legal action in a number of member countries, including Germany and Great Britain, demanding they levy additional fines against VW.