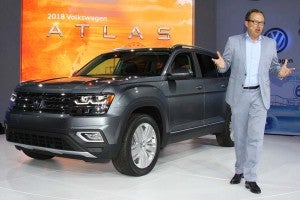 Volkswagen Group of America has begun production of the new VW Atlas it the German automaker’s plant in Chattanooga, Tennessee.

The launch marks the start of VW’s plan to build inventory prior to the official introduction of the Atlas in 2017, Volkswagen officials said.

“I am very proud of the hard work the Chattanooga team has put in to bring the Atlas to series production,” said Christian Koch, president and chief executive officer of Volkswagen Chattanooga.

“The challenge of integrating a new vehicle line while simultaneously completing a major expansion of our facility was daunting, but our team stepped up to the task and now we have taken another step towards the market introduction of the Atlas.”

Starting production of the new Atlas is part of initial effort to rebuild the maker’s business in the United States in the wake of diesel-emission scandal that sunk the automaker’s sales, beginning in the fall of 2016. 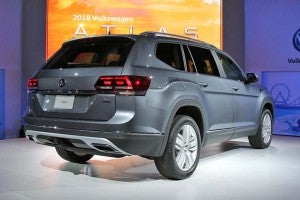 VW has spent more than $15 billion in fines, penalties and settlements in the wake of the scandal, which also led to a wholesale shake up of the company’s executive ranks and forced the VW to halt sales of vehicles with diesel powertrains in the U.S.

VW sales in the U.S., however, have also been hurt by the lack of a mid-sized sport-utility vehicle as American consumers have shown a decided preference for utility vehicles and trucks while the price of gasoline has remained relatively low.

The Volkswagen Atlas was unveiled in Santa Monica in October and marks what VW executives have described as a new chapter in the company’s American history. The seven-passenger Atlas offers competitive levels of technology and space, combined with Volkswagen driving dynamics and attention to detail.

“The Atlas marks a brand new journey for Volkswagen as we enter deeper into the heart of the American market, moving from a small-car brand towards a more family-friendly lineup,” said Hinrich J. Woebcken, CEO of the North America Region, Volkswagen.

“We are so proud that this vehicle was not only designed for the American market, but we built it in our factory right here in Tennessee.”

In conjunction with the facility expansion, Volkswagen Chattanooga continues to grow its workforce to meet the production demands of adding the Atlas to the existing Passat line. Volkswagen Chattanooga currently employs 2,800 team members – up from 2,400 this summer – and will continue to bring on additional employees throughout the ramp up of the Volkswagen Atlas.

The Atlas is built alongside the Passat at the Chattanooga plant, the result of an additional $900 million investment by Volkswagen in the facility. The expansion added more than 665,000 square feet to the plant — a 26% increase in production space. VW enlarged each shop to accommodate the integration of the Atlas.