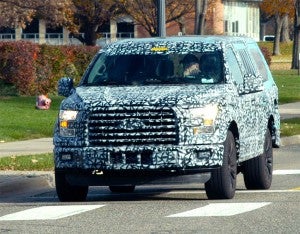 The new Ford Expedition should shed 100s of pounds switching to an aluminum-intensive body.

In some instances, what you don’t see can be more interesting than what the eye initially sees. And that’s the case with these spy shots of the next-generation Ford Expedition.

Ford will be giving options to those who want big and bigger, as the 2018 Expedition will come in two different sizes when it’s launched next year. And, yes, the big SUV will have more curves in its body design and window shape.

But the most significant change will come with the shift in sheet metal. Like the Ford F-150 and, for 2017, the Ford Super Duty pickups, the Expedition is migrating to lightweight aluminum for much of the body, as well as some chassis components.

This “aluminum intensive” approach is meant to shave hundreds of pounds off the big SUV’s mass. How much we can’t yet say, but Ford claimed weight savings of as much as 700 pounds when it launched the redesigned F-150 truck for 2016. Expedition should be somewhere in that neighborhood.

The 2018 Ford Expedition will be offered in two different body lengths and several trim levels.

We weren’t able to pinpoint which body panels used aluminum. We didn’t have our magnets with us and, besides, the drivers of these prototypes just didn’t seem willing to stop and let us get a closer look. But we expect that most of the body will shift to the lightweight metal, as was the case with the F-150 where only a few parts stuck with steel and magnesium.

(Mercedes takes the wrap off all-new E-Class Coupe. Click Here to check it out.)

In current form, the Expedition comes in around 5,500 pounds, so trimming that curb weight should yield a significant improvement to the ute’s current 15 mpg City/21 mpg Highway fuel economy. And if the F-150 is any indication, the 2018 model should also prove a bit nimbler in handling.

While most of the major changes are hidden under the skin, we can determine a few things from looking at these lightly camouflaged prototypes: among other things, there’s now some curves to the shape of the windows, a move away from the outgoing Expedition’s sharp angles. The current model’s quarter window in the rear door is now gone, apparently due to a smaller entranceway to the rear seats.

The rear door’s back cut line, meanwhile, is different in each of these models, the extended wheelbase version features a drop ahead of the rear wheel well. The other’s door cuts into the top of the wheel well.

Many of the changes from the Expedition will be shared with a next-gen Lincoln Navigator.

It also looks like there are new wheels for the 2018 Ford Expedition, though the maker typically offers a number of different wheel options.

It looks like two trim levels will be offered, along with the two different body sizes. The one prototype features a pickup-shaped grille, the other a face with cleaner horizontal bars.

Nonetheless, the overall look of the 2018 Ford Expedition will be very familiar to those who have followed the evolution of this truck since it was first introduced 13 years ago.

As for powertrains, when the new Expedition debuts in late 2017, expect to see the body-on-frame ute to retain the current engine mix: two twin-turbo EcoBoost V-6s, one displacing 2.7 liters, the other a 3.5.

(Click Here for a review of the new Ram Rebel.)

Also expect to see a new version of the Lincoln Navigator come to market about the same time. It will also share the same platform and migrate to an aluminum-intensive body.