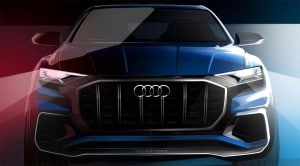 Audi will show off its Q8 Concept at this year's North American International Auto Show.

Audi has some big plans for the North American International Auto Show, with two global debuts and another model making its first appearance in the U.S.

The debut generating plenty of buzz spotlights the Audi Q8 Concept, a complement to the flagship A8 sedan that gives a clear indication of the updated styling language guided by new Audi chief designer Marc Lichte.

“With the Audi Q8 concept, we have created a new spearhead within our Q model line. Its design strongly evokes sportiness and prestige,” said Lichte in a statement accompanying one of these teaser images. “What’s more, we believe an important aspect of this showcar is that it offers a spacious interior with four equally comfortable seats, even with the flat roof line.”

Lichte took over the Audi design department in February 2014, immediately hailed as a stabilizing force in an operation that had been suffering from internal problems for a number of years. The then-47-year-old former VW brand stylist nonetheless faced the challenge of updating the design language of a brand already seen as a styling leader.

He gave the first hint of what’s coming later that year with the L.A. Auto Show launch of the Prologue concept sedan. And the new Audi Q8 concept will serve as the latest indication of the evolving theme.

The Q8 Concept is a complement to the Audi A8.

Like other Lichte show cars, the full-size luxury SUV adopts what Audi describes as an “organically integrated” version of its familiar Singleframe grille. It’s both lower and, Audi points out, “considerably wider” than what’s featured on current models. The grille, meanwhile, is framed by a pair of slit-like LED headlamps.

“Many design elements of the Q8 concept are reminiscent of the Audi Ur-quattro of the 1980s,” the release adds. “They include the extremely flat but very wide C-post and the prominent, flared shoulders above the wheels. These balanced proportions give equal emphasis to the front and rear wheels – typically quattro.”

Under the sculpted hood, Audi is expected to offer a mix of diesel and gas powertrains, as well as a new electric-turbo. An all-electric model also appears to be in the works, based on the e-tron badge you might be able to spot in these images.

Though roughly the same size as the current Audi Q7, at just over 197 inches in length and 77.6 inches in width, the five-door Q8 is reportedly set to feature an even more luxurious cabin than the German brand’s current range-topping SUV – in line with what one might expect of an A8 alternative.

Expect more lavish seating and interior trim, along with OLED high-definition digital displays. The new model is set to adopt a 48-volt power system to handle all the new electronic systems, likely including autonomous driving capabilities.

That’s not expected to be available at the launch of the production Q8, but Audi is pushing hard to get self-driving capabilities into its vehicles by the turn of the decade.

Lichte has meanwhile hinted Audi will go with an even cleaner interior than on current models, something that could mean moving away from the current MMI control system for its infotainment and other onboard systems. Expect relatively few switches and dials, with the new technology focusing on touchscreen and voice interfaces – and possibly gesture controls. That would be in line with the latest BMW 7-Series – as well as technology being added on new Volkswagen models.

As for timing, a new Audi A8 featuring the Lichte look is due around mid-2017. A production version of the Q8 seems certain to follow shortly afterwards.