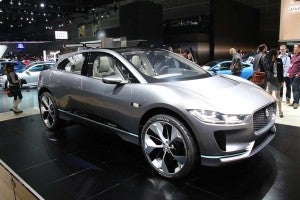 The Jaguar I-Pace is making its debut appearance at the Los Angeles Auto Show this week.

It certainly doesn’t look like your typical Jaguar. Indeed, its cab-forward proportions are decidedly different from most vehicles on the market today. That’s because the Jaguar I-Pace Concept making its debut at the Los Angeles Auto Show this week was designed specifically to take advantage of its electric propulsion system — with its batteries and motors below the floor that translates into a much larger cabin than you’d normally expect.

Jaguar is just one of the many automakers displaying new battery-based vehicles at the L.A. Auto Show. There’s the next-generation Fortwo Electric Drive, the new Volkswagen e-Golf, which gets a 50% bump in range, and the pure electric version of the Hyundai Ioniq. Chevrolet is not only showing off the production version of the Bolt battery-electric vehicle, but also the numerous awards it collected last week, including Green Car of the Year and Motor Trend Car of the Year.

With dozens of new hybrids, plug-ins and battery-electric vehicles set to debut between now and 2020 it might seem to be a golden era for battery-based vehicles. But some observers wonder whether the push to electrify the automobile might suddenly be short-circuited by the election of Donald Trump, a man who has repeatedly denied climate change, declaring that global warming is a “hoax” created by the Chinese.

“The concept of global warming was created by and for the Chinese in order to make U.S. manufacturing non-competitive,” he tweeted for the first time in November 2012, a position the president-elect has repeated numerous times since. 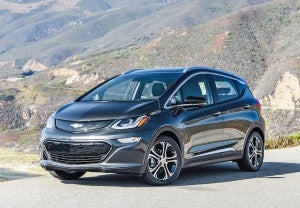 The Chevrolet Bolt is one of the many new EVs hitting the market just as a new sense of uncertainty about EVs settles in.

“The brief answer is that we don’t know what will occur with a Trump administration and electric vehicles,” said Dave Reichmuth, an executive with the Union of Concerned Scientists. “It might be awhile before we understand the priorities for a new administration.”

With a more coal and oil-friendly head of the Environmental Protection Administration, one of the most immediate questions is what will happen to the Corporate Average Fuel Economy program. CAFE has never been popular with the auto industry, and even before the election there was heavy pressure to roll back the 54.5 mpg target set for 2025.

Experts believe the only way the industry would get there is by using various forms of electrified propulsion in virtually every vehicle on the road, from micro-hybrids to pure battery-electric vehicles. If CAFE were to go away, some proponents fear, there will be less motivation to bring battery technology to market. And, if the Trump Administration eliminates tax credits of up to $7,500 for battery-car buyers, there might be less motivation for consumers, as well.

Subsidies have been critical to the nascent electric vehicle market, especially in the wake of plunging gas prices. All told, all electrified vehicles accounted for less than 3% of the U.S. market so far this year, down a point of share since oil went into its slide. Battery-electric vehicles like the Tesla Model S and Ford Focus Electric have only accounted for about 0.4% share this year. The impact of subsidies has been felt in several states, such as Georgia, where incentives have been dropped, sending local sales falling.

Tesla, which has sold more subsidized battery-cars than any other maker in the U.S. has taken a hammering in the stock market since the election – though its shares took a positive bounce after shareholders last week approved the controversial takeover of Solar City. With plans to boost sales from barely 50,000 last year to about 500,000 in 2018, Tesla is particularly vulnerable to potential shifts on climate change, CAFE and electric vehicle policies. 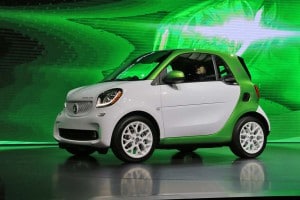 The Smart Fortwo ED is just one of potentially dozens of EVs hitting the market in the next several years.

Worried about getting off on the wrong foot with the new president, several other automotive executives declined to go on the record about the possible loss of subsidies, but there appeared to be broad concern about the timing, just as manufacturers begin to make a major push into the new market.

General Motors, for example, has heavily promoted the fact that buyers will be able to drive off a dealer lot in the new Chevy Bolt for under $30,000 — $29,995, to be precise, after deducting the federal tax credit from the $37,495 base price.

Despite such concerns, however, most automakers are – for now – promising to not just go ahead with their electrification programs but actually accelerate them. “I think the technology is at a tipping point,” said Ralf Speth, CEO of Jaguar Land Rover, during an L.A. Auto Show interview. The executive said as much as 40% to 50% of the JLR line-up could be electrified in some form by 2020.

Officials with Daimler AG, parent of both Smart and Mercedes-Benz, are similarly upbeat. The luxury side of the company revealed plans to launch an all-new battery-car brand, to be called Mercedes-EQ, during the recent Paris Motor Show. Smart, meanwhile, expects that the ED could become the best-selling version of the little Fortwo line. 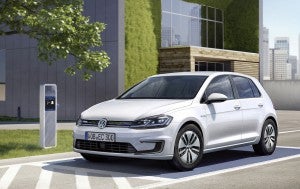 “I don’t think people are choosing electric cars only because of subsidies,” said Annette Winkler, the head of the Smart brand, during a conversation with reporters at a recent drive of the Fortwo ED.

GM insiders say they hope the possible end to subsidies wouldn’t short-circuit the launch of their new EV. It does help that the new model is the first long-range electric to be priced for a mainstream market. And the kudos the Chevy Bolt has been winning certainly won’t hurt. It was also named one of three finalists for North American Car of the Year last week, with the winner to be announced on Jan. 9.

The Bolt signals several major changes that experts hope will give momentum to battery propulsion no matter what happens in Washington. Extra range is believed to be critical, and a long list of manufacturers, from Audi to Nissan, will top 200 miles per charge during the next several years.

Price is the another key. The good news is that batteries have plunged from as much as $1,000 per kilowatt-hour in 2009 to around $150 to $200 per kWh today, and LR’s Speth said “We hope we can come down to $100” soon, a figure many believe will make battery-electric vehicles cost competitive with gas-powered cars even without subsidies.

Then there’s the issue of performance. Early electrics, such as the Nissan Leaf, put a premium on energy efficiency and range at the expense of performance. But electric motors actually generate tremendous amounts of tire-spinning torque. A Tesla Model S equipped with optional Ludicrous Mode will launch from 0 to 60 in under three seconds, according to the company, as well as independent reviews, making it one of the fastest vehicles on the market.

Proponents, such as Tesla founder and CEO Elon Musk, GM chairman and CEO Mary Barra and Smart’s Winkler frequently refer to the “fun factor” that they believe will become more and more of a selling point for future battery-electric vehicles.

“We have to make our business independent of political decisions,” said Winkler at the Smart Fortwo ED drive in Miami, which means being less dependent upon government support. At the same time, she acknowledged that “It could take longer” to get sales charged up if the new Trump Administration pulls the plug on CAFE and subsidies.

One reason that those who support electrification aren’t entirely concerned is that the U.S. is no longer the end-all-be-all market for new technologies. And, if anything, many other countries are going all-in on battery power. In some cases using the carrot, in others, the stick.

A number of European countries are weighing the idea of banning all but zero-emission vehicles – which would include hydrogen fuel-cell vehicles, as well as EVs – from major city centers such as Rome and Paris. Germany has laid out tentative plans to ban the internal combustion engine entirely before mid-century. London, meanwhile, exempts such vehicles from the hefty congestion charge to access the central city.

China, which is the world’s largest new car market also became last year the biggest source of sales for plug-based vehicles — including both battery-electrics and plug-in hybrids. The country is aggressively and directly encouraging manufacturers to electrify. Motorists, meanwhile, get to ignore the monthly registration limits for new vehicles in more than a dozen major cities, including Beijing and Shanghai.

Not everyone in the U.S. auto industry is upset to see moves that might roll back federal standards that would support electrification. David Cole, director-emeritus of the Center for Automotive Research, in Ann Arbor, Michigan, saw the 54.5 mpg Corporate Average Fuel Economy mandate as a “job-killer.” But Cole also believes that the push to electrification will continue. The industry is too far along, and will still face too many mandates to retreat worldwide.

Nonetheless, the concern is that sales in the U.S. could be hit just as the first of a new generation of more affordable, longer-range, more fun-to-drive models comes to market. Manufacturers are struggling to make the economic work after long losing money on every battery-car. A retreat by Washington could make that equation more difficult to put in place.