This Car, From a Brand You’ve Never Heard of, May Soon be One of the World’s Fastest – and It’s Electric 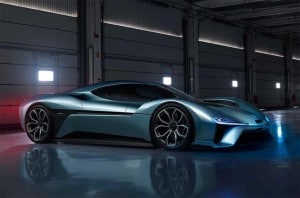 The NIO EP9 from NextEV will do 0 to 60 mph in less than 2.7 seconds and tackled the Nurburgring in just over 7 minutes.

Electric cars are fuel efficient but far from fun to drive, right? Well, if Tesla already hasn’t convinced you otherwise, you might want to check out the new NIO EP9.

You’ve almost certainly never heard of NIO. It’s a sub-brand just launched by China’s NextEV, and it’s intent on making quite a splash when it comes to market with this gull-winged hypercar. Preliminary tests reveal a prototype has already lapped the Nurburgring Nordschleife in a blistering 7 minutes 5 seconds – one of the fastest times ever clocked there, and a solid record for a battery-electric vehicle.

If you’re not standing on the throttle all the time, the EP9 will manage to travel as much as 265 miles on a charge, according to NIO, and you can reportedly top off the battery in as little as 45 minutes. In an interesting twist, the company also claims the twin battery packs can be swapped out for fresh ones in just eight minutes.

While NIO is an entirely new brand-within-a-brand, NextEV has been boosting its profile lately – among other things by participating in the Formula E battery-car race program. That appears to have given it a jump on taking its electric drive technology from track to street.

The numbers NIO is claiming for the EP9 are staggering. It claims the two-seater will make 1,341 horsepower and 1,480 newton-meters, or 1,092 pound-feet, of torque. In terms an electrical engineer would understand, the car’s four motors produce a staggering 1 megawatt of power. 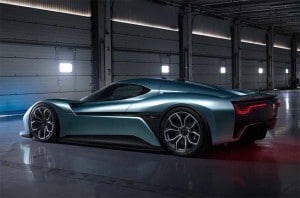 To put that into perspective, the Koenigsegg Regera, currently the world’s most powerful automobile, is no slouch, blasting out 1,500 horsepower and 2,000 pound-feet. Nonetheless, the EP9 promised to hit 100 kmh (62.5 mph) in 2.7 seconds, and will blow through the traps on a quarter-mile run in 10.1 seconds, at 155 mph. Top speed is rated at 194 mph.

The NIO battery-car uses a composite body and monocoque to hold down weight, but those batteries still add mass. At 3,825 pounds, it’s nearly 500 pounds heaver than a McLaren P1.

The exterior design is meant to both catch the eye and cheat the wind. The NIO EP9 is equipped with a retracting rear wing, several Venturi tunnels, a floor diffuser and an active front splitter to both reduce drag and maximize downforce. Another impressive statistic: the car will manage 2.5Gs of lateral force during high-speed maneuvers, something that even Formula E drivers would be impressed by.

(Click Here to see more about VW stretching the range of the e-Golf.)

The EP9 also boasts the sort of brakes needed to corral it after a record run: All four wheels barely hiding 16-inch rotors with six-piston calipers. There’s also an active suspension with adjustable dampers. 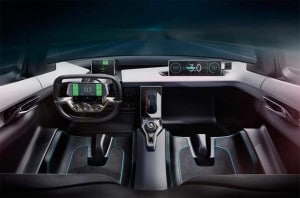 The electric hypercar is certainly one way to bring attention to a new brand. But NIO plans to build just six EP9s, all earmarked for the company’s initial investors. No price has been revealed, but Britain’s AutoExpress reports each car costs about $1.2 million to build.

Parent NextEV will launch the NIO sub-brand in China, but eventually will bring it over to the States, or so it hopes. It won’t be alone, a variety of Chinese automakers are targeting the U.S. Several have decided to get a leg up by designing and building their first vehicles in the States, including both Faraday Future and LeEco.

How big the U.S. market will be for battery cars is a big uncertainty. Tesla is hoping to deliver a tenfold increase in its own volume, from 50,000 in 2015 to 500,000 by 2018. But industry observers caution that growth could be tamped down by the incoming president’s skepticism about global warming and government regulations.

China is a different story, however. Struggling to address endemic smog problems, the Beijing government has enacted a series of steps meant to boost sales of zero-emission vehicles. As a result, China is already the world’s largest market for EVs and demand is expected to grow substantially in the coming years.