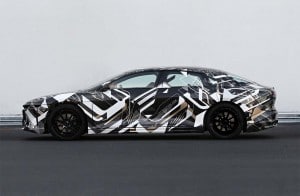 Lucid's prototype may seem a little tame compared to its EV-making competition, but it will get a complete redesign, officials claim.

Yet another electric vehicle wannabe has announced it will enter the still-small U.S. market, Lucid Motors revealing plans for a new assembly plant based in the suburbs of Phoenix, Arizona.

Construction on the $700 million factory is set to begin early next year, the company – originally called Atieva – promising to have its first vehicles on the road in 2018. As Lucid, it would join a growing procession of electric vehicle manufacturers, both start-ups like Tesla Motors and traditional auto companies like General Motors, vying for what is still a miniscule part of the American automotive market.

Whether demand will absorb all the new comers is far from certain and could be strongly impacted by the as yet-uncertain energy policies of the incoming Trump Administration which could relax or even eliminate upcoming auto mileage rules that are promoting developing of alternate propulsion technologies.

Lucid is actually one of the older players now looking to enter the battery-electric vehicle, or BEV, market. Founded in Menlo Park, California, in 2007, what was then Atieva was one of a handful of start-ups that focused on making advanced lithium-ion battery technology. But it began shifting course in recent years as it hired on talent from the automotive side of the business. A former Tesla executive, for one, is now Lucid’s chief technology officer.

The start-up previously released an image of a heavily camouflaged sedan, a prototype used in the development of its battery drive system. The design is surprisingly conventional considering where other BEV start-ups, such as Faraday Future, have gone with their own new designs. At an event in the town of Casa Grande, Arizona, however, Lucid CTO Peter Rawlinson suggested the prototype will be “reimagined and redesigned” before it reaches production. 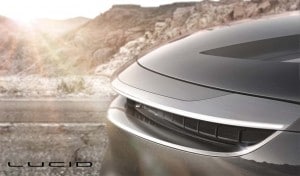 Lucid released this teaser image, but with plans to re-engineer and redesign the company's first vehicle, who knows what we'll see.

That seems to fit with a carefully cropped teaser image that shows a more aggressive front end of Lucid vehicle. Because of the way electric propulsion systems operate, the batteries are likely to be mounted in or under the load floor, the electric motors on the axles. So, there is less need for a traditionally sized engine compartment. Rawlinson hinted that Lucid’s production model would recapture some of that space for the passenger compartment.

As for the drivetrain itself, the firm appears to be aiming to outdo the performance of the latest Tesla offerings, the Models S and X, with their so-called Ludicrous Mode. The Lucid cars will deliver about 1,000 horsepower and still manage up to 400 miles range. Rawlinson has also said Lucid is working on autonomous driving capabilities.

While Arizona is not a place where the auto industry has traditionally had a base of operations, a number of battery-care start-ups have been turning to that part of the country. Tesla is in the midst of building its Gigafactory battery plant near Reno, Nevada. And Faraday Future has begun work on a $1 billion assembly plant near Las Vegas.

But that latter project has been running into trouble, Nevada officials recently revealing that Faraday has halted work at the site, at least temporarily, due to financial problems. An official with the company subsequently told TheDetroitBureau.com that the operation will resume next year.

But the delay raises questions about not just Faraday’s future, but that of another BEV start-up, LeEco, both backed by the Chinese electronics billionaire Jia Yueting.

LeEco ran into its own setback during the official premier of its first car, the LeSee, last month. The prototype shorted out and failed to roll onto the stage during an event in San Francisco.

That underscores the challenges that such start-ups will face, even if the U.S. market for electric vehicles does begin to expand, experts warn. Tesla has faced a number of its own setbacks. None of its products have come to market on time. And even after a more than two-year delay, the Model X battery-SUV has suffered such serious quality problems influential Consumer Reports magazine has issued a warning to potential buyers.

Tesla’s big test will come with the planned launch of its first mainstream product, the Model 3, later next year.

Whether Lucid can learn from those lessons, keep its cash coffers flush and then deliver a competitive product remains to be seen, but the ambitious start-up promises to show what it has in relatively short order.