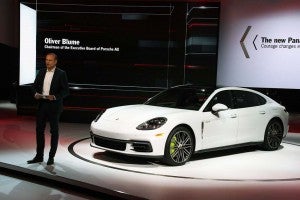 The new Panamera Executive Hybrid is just one of two new larger Panamera hybrids for the Chinese market.

Porsche’s popular Panamera has two more reasons to draw buyers into the brand, the automaker rolling into the Los Angeles Auto Show with both the new Panamera Executive model, and a plug-in model, the Panamera 4 E-Hybrid Executive.

Both start out as stretched versions of the second-generation Porsche Panamera launched earlier this year. The plug-in E-Hybrid is likely to find some momentum in the green-minded California market, where it will be positioned to take on the likes of the Tesla Model S.

The two versions likely will give Panamera more traction in China where there is pressure for more battery-based models – and where buyers love large rear seats. Think of the Executive as the first Porsche specifically designed to be driven in.

The Porsche Panamera Executive and Panamera 4 E-Hybrid Executive use most of the stretched wheelbase to increase rear legroom – about six inches, in fact. And that’s complemented by a more luxurious back compartment. The rear seats now have eight-way power adjustability, for example, and each of the two back passengers get their own ten-inch entertainment screens which can be removed from the car to function as portable tablets.

(Porsche was recently named one of the four best auto brands. Click Here for more.) 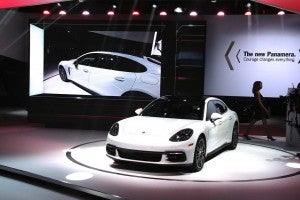 The new Executive line doesn’t walk away from performance, Porsche Chairman Oliver Blume telling his Los Angeles audience that, “Our goal is to stay true to Porsche’s heritage.”

As for propulsion, the Executive line will offer four alternatives, a 330 horsepower V-6, a 440-hp package in the 4S Executive, and a biturbo six in the Turbo Executive that gets you up to 550 hp.

Going green won’t mean much of a sacrifice – unless you count the price tag of the new plug-in, which is expected to top $100,000. The driveline is a 462-hp, gas-electric combo in the 4 E-Hybrid, enough to launch from 0 to 60 in just 4.5 seconds. It also manages 31 miles in pure battery-electric mode. 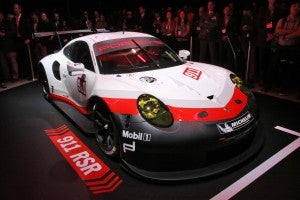 The engine was moved slightly forward on the new 911 RSR to make room for a massive rear wing.

While Porsche officials might talk about heritage, the brand has clearly gone through a number of changes in recent years. Its two SUVs, the Cayenne and Macan, now generate the majority of the brand’s global sales – which touched a record 178,314 for the first three quarters of this year – and the four-door Panamera is another big contributor.

But to make sure the brand stays on track – quite literally, the L.A. Auto Show also brought the debut of what could be considered the ultimate race version of the classic Porsche 911.

“We optimized everything,” declared Detlev von Platen, the CEO of Porsche’s North American operations, as he pointed to the new 911 RSR. Even the engine was moved slightly forward to make room for a massive rear wing.

(To see more about the new Panamera hybrid and 911, Click Here.)

The track model will compete in 19 races next year, including the 24 Hours of Le Mans.