Maker hopes "The Force" is with them on limited edition sport-ute. 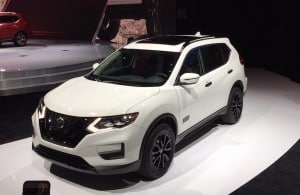 Nissan is part of the Dark Side ... and the light side with its new Star Wars-themed Rogue SUVs.

For those Star Wars fans who are looking to make sure “The Force” is with them all the time – or at least when they’re behind the wheel – Nissan is making that possible with the new Star Wars Edition Nissan Rogue.

Tying into the soon-to-be-released movie, “Rogue One: A Star Wars Story,” Nissan is offering the limited edition SUV on a run of just 5,000 units in the U.S. and another 400 in Canada. The automaker’s Rogue is the first-ever Star Wars-branded full-size production vehicle and warns it stands ready to “take on any battle.”

Named “Nissan Rogue: Rogue One Star Wars Limited Edition,” it is designed to build awareness and familiarity of the extensively redesigned 2017 Rogue and come sixth an authentic numbered Death Trooper helmet. The movie debuts during the Christmas holiday.

“Nissan is doing the same with its industry-leading cars, trucks and SUVs like the new Rogue – our most advanced Rogue to date – so it’s natural that the two join forces.” 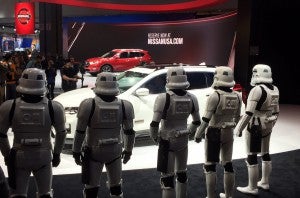 Nissan's Star Wars-themed Rogue appears to be surrounded at the L.A. Auto Show.

(The force is strong in this car. For more, Click Here.)

Like all 2017 Rogue models, the Nissan Rogue: Rogue One Star Wars Limited Edition is powered by a 2.5-liter DOHC 16-valve inline 4-cylinder rated at 170 horsepower and 175 lb-ft of torque. So while “The Force” may be with you, it won’t get you anywhere any faster.

Additionally, a new, first-ever Rogue Hybrid will be available by the end of 2016, but not offered with the Limited Edition. The special package costs $1,990 and only available on the aforementioned Sun and Sound Touring Package.

“For most fans, their love affair with Star Wars started in childhood, with hours spent playing with miniature replicas of the various X-wing fighters and other vehicles,” added Tucker.

“Now, for a special few, they have a chance to engage with a full-scale collectible, the Nissan Rogue: Rogue one Star Wars Limited Edition. And more than just a big kid toy, the Limited Edition is every inch the real thing — a Rogue for every adventure you can imagine.”