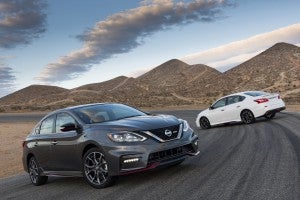 Nissan expanded its Nismo performance line-up for 2017 with the new Sentra Nismo.

The popularity of small, powerful cars continues to drive automakers to produce new models with the latest being the 2017 Nissan Sentra Nismo: The maker’s first-ever Nismo-branded Sentra.

“With the addition of the new Sentra NISMO, the enthusiasts behind NISMO production sports vehicles like the GT-R NISMO and 370Z NISMO sought to widen the reach of the NISMO brand,” said Michael Bunce, vice president, Product Planning, Nissan North America Inc.

“But they wanted to do it without diluting the NISMO brand – which meant Sentra NISMO going deeper than just visual changes to an enhanced, visceral driving experience.”

The Sentra joins a long and prestigious list of vehicles getting the sport-model upgrade, including the GT-R, Juke and 370 for 2017.

Like its siblings, it gets an upgraded powerplant: a 1.6-liter turbocharged 4-cylinder engine putting out 188 horsepower and 117 foot-pounds of torque. The engine is matched with choice of a 6-speed manual transmission, with gear ratios selected to take maximum advantage of the engine’s powerband and torque curve, or an advanced, tuned Xtronic transmission. 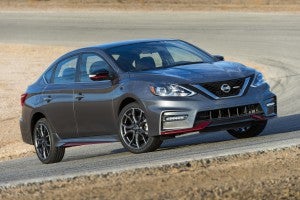 “It was important to offer a 6-speed manual transmission with the new Sentra NISMO, both to reinforce its pure performance credentials and to up the direct engagement factor between driver and the vehicle,” said Bunce.

“While today’s sophisticated, paddle shifted automatic gearboxes can often match or exceed the performance of a manual transmission, there’s still nothing like the experience of rowing through the gears with three pedals in the footwell.”

However, Nismo-badged Nissans get more than just an engine transplant. Engineers strive to achieve a precisely tuned balance of body, interior, chassis, suspension, steering and powertrain for these vehicles.

(Click Here for more about the Honda Civic being named the best overall buy by KBB.com.) 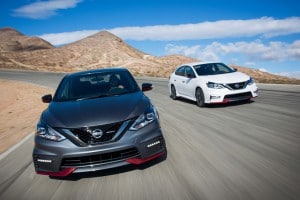 In addition to a power upgrade, the new Sentra Nismo gets improved handling for 2017.

However, since no one wants to ride around in a really fast car with great handing and a paltry radio, Nissan ensured the new Sentra Nismo got plenty of electronics for its buyers. Actually, there is only one choice: the Nismo Premium Package.

(Chevy Bolt one of nine NACTOY finalists. Click Here for the story.)