Putting some soul in motion. 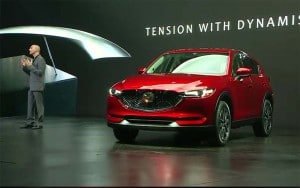 Forget performance. Ignore those fancy new infotainment systems. Virtually every study shows that design is still one of the top motivators when it comes to choosing a new car. And, in recent years, Mazda has worked hard to elevate automotive styling into an art.

The automaker takes things another step with the latest version of its mid-range CX-5 crossover now making its debut at the Los Angeles Auto Show. While picking up on some of the obvious cues of the bigger CX-9, the new CUV takes Mazda’s Kodo, Soul of Motion design language another step forward – adding an eye-catching new paint job it has dubbed Soul Red Crystal.

“We were searching for a pure emotional expression,” said Julien Montousse, the head of Mazda’s U.S. design operations, during a media preview ahead of the formal opening of the 2016 L.A. Auto Show.

The front end bears a clear family resemblance to the CX-9, though the 2017 Mazda CX-5’s new mesh-pattern grille is more deeply inset, giving it a distinctively three-dimensional look and feel. The grille, meanwhile, is framed by slit-like headlamps, picking up on a broader industry trend away from the oversized, “jewel-like” headlamps that seemed to be everywhere in the early part of the decade. 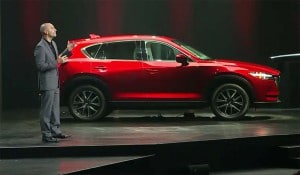 The new Mazda CX-5 shows off the latest iteration of the Japanese maker's Kodo design language.

“The challenge was to elevate Mazda design to world-class standards while giving it a unique identity,” explained Ikuo Maeda, the Hiroshima-based automaker’s global design chief.

One goal was to give the new Mazda CX-5 what Montousse called “maximum visual stability.” In ways sometimes subtle, sometimes obvious, the new crossover’s lines, curves and creases all direct the eye towards the wheels, making it feel more planted.

The interior also shows a more mature and elegant approach to design. Mazda calls the instrument panel a “driver-centric” layout, with all gauges and controls clustered tightly together, a tablet-sized display screen at the summit of the center console.

The interior features much more high-end detailing, with elegant and precise stitching on panels and seats, and designers proudly boasted that all possible touchpoints were padded.

Mazda tries to root both design and engineering in Japanese tradition, and the concept of Jinba-Ittai is at the heard of product development. The term refers to the close relationship between a horse and rider, something Maeda said Mazda hoped to achieve between driver and vehicle with the new CX-5.

That may be why Mazda products tend to have a strongly sporty reputation even if they are nowhere near the fastest vehicles in their individual segments. 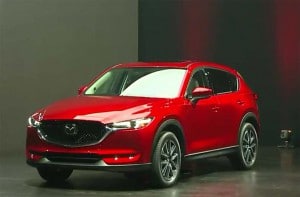 Globally, Mazda will offer the new CX-5 with three SkyActiv powertrains, including a diesel.

Globally, Mazda plans to offer CX-5 buyers a choice of three different powertrain packages. That includes a base 2.0-liter SkyActiv inline-four, a peppier 2.5-liter alternative – both using gasoline – and the new SkyActiv-D 2.2-liter diesel. The maker was vague with details, holding off engine specifications until closer to launch. But the current versions of the 2.0-liter SkyActiv-G makes 155 horsepower, the bigger gas package 184 hp. Both gas engines will be offered with an automatic gearbox only.

Mazda has been promising to bring the SkyActiv-D to the U.S. for some years. Ironically, it struggled to figure out the formula Germany’s Volkswagen claimed to have come up with to somehow deliver power, mileage and low emissions from the same engine. Now that it turns out VW cheated, Mazda is left wondering whether there would even be an American market worth targeting for a SkyActiv diesel.

Look for the new CX-5 to reach U.S. showrooms by mid-year 2017. The crossover is Mazda’s biggest seller, accounting for about a quarter of its global volume and a full 37% of its U.S. sales so far this year.