Genesis Pumps Up the G80 With New Sport Edition 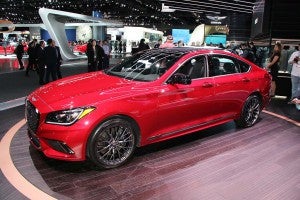 Genesis, Hyundai’s new luxury brand, soon will be pumping a little more muscle out of its G80 sedan. The midsize model will be offered with the same, twin-turbo V-6 found in the flagship Genesis G90.

With the biturbo 3.3-liter engine, the Genesis G80 Sport will make 365 horsepower and 376 pound-feet of torque. Current versions of the G80 turn out anywhere from 311 to 420 hp. While not the most powerful package, the lighter V-6 should add, as the name implies, a sporty lift to the mid-range model.

“It drives like a bat out of hell,” suggested Erwin Raphael, the executive in charge of the Genesis brand for the U.S. market, during an unscheduled preview of the G80 Sport at the Los Angeles Auto Show.

By 2021, Hyundai hopes to have six dedicated models in the Genesis line-up, including at least one sport-utility vehicle. But, for now, there are two, the G80 replacing the old Genesis sedan, the flagship G90 subbing out the old Equus model.

Taking on competitors like Mercedes-Benz and BMW isn’t easy, so the Korean luxury brand is loading up on standard features and holding back on pricing – a strategy that once proved quite effective for Lexus when it was in start-up mode. Performance is another hallmark for the Genesis brand. 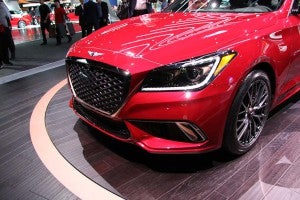 The Sport’s suspension has been retuned, with continuously variable shocks, and gets dark chrome an copper trim accents and unique 19-inch wheels.

The twin-turbo 3.3-liter isn’t the most powerful engine in the Genesis line-up. In fact, the G80 already has a 5.0-liter V-8 that thrusts out a full 420 hp compared to the biturbo package’s 365. But, several Genesis officials noted that the lighter V-6 makes up for that on a power-to-weight ratio.

The V-6 also has the sort of torque curve you normally don’t expect from a turbo. “It’s more like a torque table,” suggested Dave Zuchowski, CEO of Hyundai Motor America, with 100% of its power available from 1,300 to 4,500 RPMs.

The 2018 Genesis G80 Sport will get a few, generally subtle visual tweaks, including more aggressive bumpers, with a pair of vents anchored between the upper and lower grilles. There are larger front side grilles, as well. And, in back, there’s now a non-functional diffuser and quad exhaust tips.

According to Raphael, the visual tweaks borrow a bit from recent Genesis concept vehicles and hint at some more dramatic changes to come. 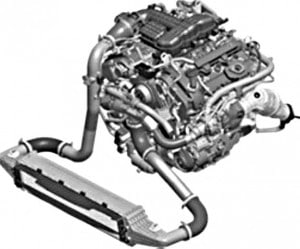 The Sport gets a 3.3-liter twin turbo V6 putting out 365 horsepower and 376 pound-feet of torque.

From a functional standpoint, the Sport’s suspension has been retuned, with continuously variable shocks. The eight-speed automatic has been sport tuned, with shifts coming faster than with the current G80 gearbox.

The 2018 Genesis G80 Sport won’t reach showrooms until next spring, and we’re not likely to hear about pricing until close to launch. Company officials say they’re toying with the numbers. They’ve gotten strongly positive feedback from dealers on the new model, but they know demand will be closely linked to the Sport’s ultimate premium. Don’t be surprised if it comes in at around $2,000 to $3,000 above the comparable version of the G80.