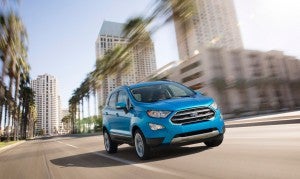 Ford announced it will be adding the new EcoSport small crossover its line-up. The maker will import the car from India.

Better late than never, or so Ford is telling potential customers looking for its downsized EcoSport SUV. Already a popular option in most other global markets, it will go up against a growing list of pint-sized crossovers, including the Nissan Juke, as well as the Toyota C-HR that is also making its debut at this year’s Los Angeles Auto Show.

Such models seemed an unlikely fit in the American market only a few years ago, which is why Ford hesitated at bringing the EcoSport over, but the subcompact crossover niche has become one of the country’s fastest-growing segments.

We’re not sure if that pun was intended, but Ford is confident the small ute niche will expand rapidly enough to take on all newcomers. 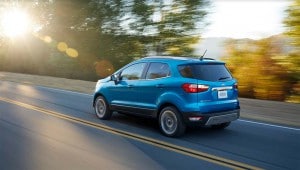 The maker gave a first hint of what it had in store last week, with a preview hosted by DJ Khaled, the self-styled “King of Snapchat.” He will feature the Ford EcoSport at a three-day “Go Small, Live Big” concert featuring a number of top musicians and DJs.

While the EcoSport may be a relatively no-frill model, it plays up to the demands of millennials, with plenty of infotainment technology, including a high-resolution, 8-inch floating display screen for Ford’s latest Sync 3 system. It also features both Apple CarPlay and Android Auto technologies.

On a more functional level, Sync Connect can perform a variety of functions, including remote door unlocking. 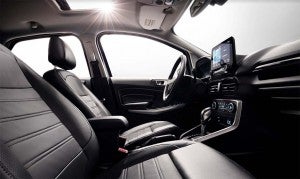 There are two USB ports and even an optional 110-volt outlet.

The Ford EcoSport will be offered with two different powertrain options:

Both engines will be paired with a six-speed transmission.

While Ford is betting the little ute will appeal to folks who aren’t interested in “buying stuff,” it has given the new EcoSport plenty of places to tuck things away: a total of 30 storage bins, nooks and hooks, it says.

(Bill Ford congratulates Trump on election victory while in India. Click Here for the story.)

Ford apparently wants to build momentum for the EcoSport. It won’t actually roll into U.S. showrooms until early 2018.