British marque ready to compete with best luxury offerings in its class. 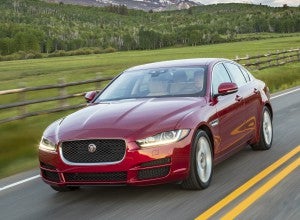 The new 2017 Jaguar XE is ready to take on the standard bearers in the luxury segment.

Once something of an endangered species on the American road, Jaguar has made a comeback with a series of handsome new vehicles that have caught the attention of luxury buyers who are looking for something fashionably different.

Eager to expand its range, the British marque has made the new Jaguar XE capable of holding its own with the cars built by Mercedes-Benz, Audi, BMW and Lexus.

On the inside of the XE, Jaguar’s designers, mindful of the Audi’s finely crafted interiors, have given the XE a luxurious feel that is built around an array of carefully chosen materials and well-crafted features that are nicely combined to create a space that is at once functional and elegant.

The seats are very comfortable. The controls are easy to use and gauges are crisp and easy to decipher, even more expensive bespoke models. The XE’s cabin is also very quiet thanks, making it quite easy to enjoy a conversation, talk radio or music during a longer drive.

The tailored interior of the XE is nicely matched with its ride and handling. Designed from as sport sedan that is meant to compete directly the BMW 3 Series or Audi A4, the Jaguar XE makes good use of the lightweight aluminum body and chassis. 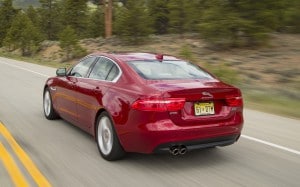 The new lightweight chassis on the XE makes it feel nimble and quick on the road.

The lightweight chassis, which is made in one of Jaguar Land Rover’s brand new plants in Merry Old England, makes the rear-wheel-drive Jaguar XE very nimble and assured around corners and through curves or while climbing a hill making it a great deal of fun to drive.

The Jaguar XE also features a double wishbone front suspension. The rear suspension features an integral link system that gives the car a solid feeling in tight spots but also supple at the same time on a variety of different road surfaces.

Electric power steering is standard on the XE but it doesn’t seem to lose track under or ahead of the car like some systems do and delivers a smooth and agile feel that the driver can actually detect from the grip of the steering wheel. The stability of car when it is taken up to speed on even on a bumpy rural highway is one of the XE’s great features and underscores the car’s strengths as the trees and fence posts go whizzing by.

The XE is also quite maneuverable both in and around traffic and is relatively easy to park even in crowded conditions, which is a necessity in today’s day and age and rear-wheel-drive configuration.

The chassis is complemented by the XE’s powertrains, which include both 3.0-liter V6 that runs on gasoline and a more fuel-efficient, 2.0-liter diesel engine. The ZF 8-speed automatic transmission found on the XE is controlled using the Jaguar rotary shifter and steering wheel shift paddles.

The supercharged 3.0-liter V6 produces 340 horsepower and 332 foot-pounds of torque. Matched up with lightweight chassis the XE’s power to weight ratio gives the car extra punch when called to perform. 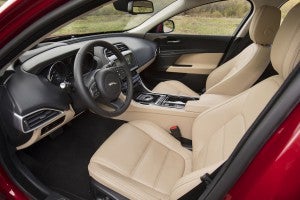 The tailored interior of the new XE offers plenty of room and comfort with an extremely quiet cabin.

The V6 has been officially timed doing the spring from 0-60 mph in just 5.1 seconds and XE with the all-wheel-drive system has been timed at 5 seconds thanks to limited slip. However, the XE 35t model has an electronically limited top speed of 155 mph.

After driving the V6 version, the XE equipped with the 2.0-liter diesel seems to lack some of the vim and vigor. However, the overall performance of the diesel is still most impressive, as it offers a solid performance under a variety of driving conditions and steady drivability to go with its impressive range, which can take you a long way on road trip.

But at $34,900 before adding the $995 destination charge, the diesel version is less expensive than the XE with a the V6, which can run $49,200 for the XE R-Type. Throughout its history, Jaguar has also produced captivating shapes and designs.

The XE doesn’t exactly break any new ground but the exterior is refined, elegant and stand with easily flowing lines, artfully crafted wheels corners and lighting treatments stands apart from the luxury cars produced by its German and Japanese rivals. 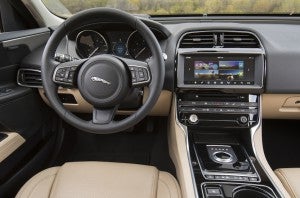 With easy-to-read gauges and infotainment features at the driver's finger tips, the new XE is a driver's delight.

The grille presents an impressive face to the world and the rear of the car has a nice clean finish that preserves the basic simplicity of Jaguar’s design characteristics.

Of course, no luxury car dare peek its nose into a showroom without the latest or nearly the latest technology.

Thus the Jaguar XE comes with an excellent head up display that you can actually read under different light conditions as well as what is becoming the standard suite of driver assistance features such as adaptive cruise control blind-spot detection, lane departure or drift alerts and forward collision warning and braking system that utilizes stereo cameras to detect danger in front of the car.

Luxury buyers are looking for something unique, which give Jaguar a small edge now. But selling cars is way more complex than selling luxury goods likes watches, purses or even furniture. New vehicles have to stand up to comparison against cars built in factories by big companies employing hundreds of skilled engineers, workmen and carefully calibrated robots.

(To see more about the sales gains Jaguar is making on the top luxury sellers, Click Here.)

The XE is definitely a smart looking, well-crafted and well-equipped sedan with both character and plenty of spirit. The question is can it find buyers in market that’s gone mad for trucks.